Barry, as I said above:

As the IsoAcoustics pucks do not offer 100% isolation across the audio bandwidth then the result you get will also depend in part upon your equipment shelf and its support. So I am afraid that I am also saying that other posters’ experiences may or may not be applicable to you as there is not going to be a case of everything else being equal.

So the only applicable result will be what you experience. Someone with their Bartok on a coffee table may have a different experience adding such footers to someone with it on an HRS rack.

In any case my view is that as a general principle it is pointless applying tweaks until you have become fully accustomed to the equipment’s sound au naturel.

OK …I finally bought Stillpoints Ultra + base (big trouble to explain my wife why I spend that money for metal things!!). I tried them under my pre-amp and under my power amp and was some sort of frustrated because it didn’t deliver what I expected. BUT put these under your DAC (I did under Rossini+Clock) and the system plays totally transformed. Less “boomy bass” (I had problems with…), more 3-D effect and better separation of instruments.
Really cool - BUT please test it before buying 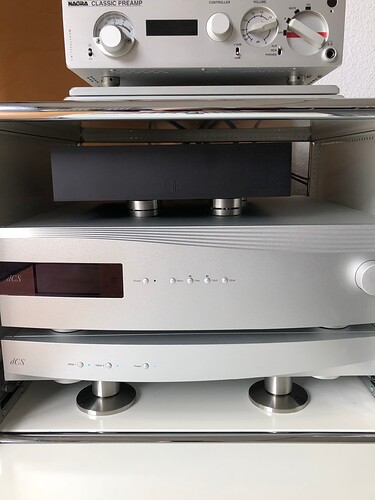 This has been my experience with Stillpoints as well. Currently in use - Ultra 5s and Ultra SSs.

My experience with Stillpoints was a bit different. I installed them under my gear and was impressed by the change in sound. After about three weeks I removed them and liked the sound even more without them.

I have held the position for some awhile now that there are times in this hobby that we confuse any change in gear with improved sound. We get so used to our set-ups that even subtle changes cause us to pay more attention and think we like what we are hearing. Change for Change sake.

FYI, Marc Mickelson tried Wilson Audio’s Pedestals and was impressed, and wrote of it in The Audio Beat. 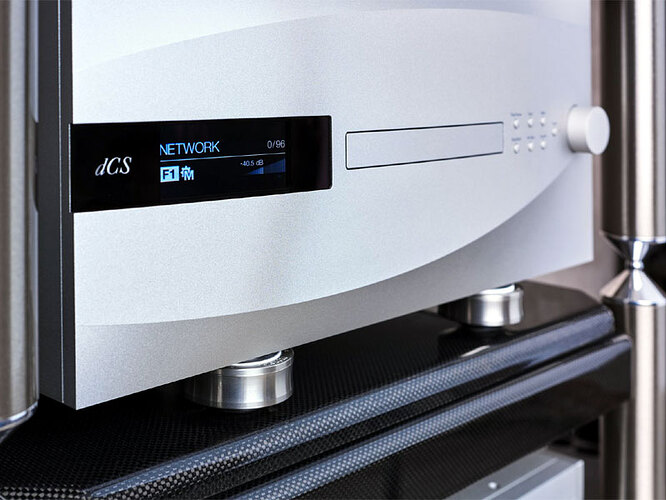 My biggest concern with Stillpoints is the fact that the design dictates metal to metal contact. The first concern is abrasion and scratches on my components, I’m picky, and the second is secure contact. They are inherently lacking enough friction to prevent the components from sliding on the surface of them. A friend of mine has Stillpoints Ultra Six V2’s and he’s purchased a replacement base for his DAC. He’ll install it to avoid selling the DAC down the road with a scratched base.

I didn’t get much joy with Stillpoints. I tried some a few years back. They just seemed to make everything sound too bright and edgy. Given them a swerve ever since.

One isolation support that I have found to be very effective - under speakers at any rate. Is the IsoAcoustics Gaia. Great improvement and very cost effective. So much so in fact that I thought I’d try their Orea series isolators, designed for components. Nope, complete fail. They made the Bartok, especially, sound distinctly worse.

The isolator for components that does seem to work well in my system is the Quadraspire QPlus. These are made from bronze and bamboo. I don’t know exactly how they work, but they certainly do. I have them under the Bartok and my Audio Research Ref.6 pre-amp. One thing with these, is that you place them under the existing feet, rather than at arbitrary points on the base plate. This approach - more inline with what the designer of the unit was expecting - makes more sense to me.

I can’t say my hearing is good enough to hear a difference with the Stillpoints used under my Rossini, but I can definitely vouch for the IsoAcoustic GAIA’s on my speakers. These were transformational and worth every penny.

I have Gaia 1’s under my Wilson Sasha’s and Orea’s under all of my components and I couldn’t be more pleased.

Below in italics is what an ISO Acoustics customer service rep says about the difference in their Home and Pro versions of their pucks.
“As for the difference between our Pro and Home Audio series the ISO-PUCK and the OREA series respectively. The ISO-PUCK was originally designed for the pro audio and Musical Instrument (MI) channel, and used with studio monitors, guitar/bass amps, DJ turntables, etc. The OREA, on the other hand, is designed for home audio. The performance curve for the OREA models are narrower in weight range and will provide a slightly stronger sonic benefit in its range than the ISO-PUCKs. The more effective isolation results in more sound clarity and focus.”

Is there a significant price difference between the Home & Pro version. The Home version Orea Indigo puck which is the right puck for the Rossini is $60 and Guitar Center just dropped the Pro version that is needed for the Rossini to $50.

I know this is an old post but it seems like a lot of folks have tried Stillpoints and IsoAcoustic pucks under their dCS components.

Has anyone compared Stillpoints, IsoAcoustics Orea Indigo pucks and the Arya ReVopods? I’ve read good things about all three and am leaning towards the IsoAcoustic Orea Indigo pucks as they’re the least costly. Reviews of the ReVopods typically mention to get the most SQ benefit they need to replace the feet and screw into the component (Vivaldi or Rossini or Bartok).

I appreciate your experience feedback. If you tried or still use the ReVopods please mention if you screw them into the dCS component?

To expand on my post above, I’ve owned both the Stillpoints and IsoAcoustic Orea Indigos and am not convinced I heard a difference with either, so ended up going with the latter.

Living in a relatively small village surrounded by fields, I can’t say how much more someone would benefit in a town environment, but I can see this making a difference.

As mentioned before, the GAIA’s are truly amazing under my speakers. These (or similar) are a no-brainer.

I have the IsoAcustic studio Isopucks under my speakers and they are a cheap no-brainer upgrade. Money very well spent and zero need for A-B testing. Once they go into place they are not going to leave.

Hi, I note no one has mentioned the critical mass systems centre stage footers. I use them on my full system Unfortunately they take 10-30 days to ‘settle in’, so A/B comparisons are out.

Initially I went on reviews and faith: I bought and reviewed the speaker footers on my active Kii 3 + stands at the manufacturers request - see what’s best forums if any interest. The results were astonishing enough to convince me to do all the electronics including the NB.

I never owned stillpoints, but at one time I had borrowed and used one set. They made the system sound hard and ‘metallic’. Have not tried them again. For full disclosure, I should say that was 15-20 years ago, early days, probably they are better now.

Now I am pretty much sold on these centre stage jobs. Even though they are not cheap in themselves, I was never able to afford the big critical mass systems gear though I always wanted it… so when these were introduced it was a no brainer. According to the designer they are the culmination of his life’s work with vibration control.