Hi everyone. Hope you’re all well.

I’m the owner of a Vivaldi four-piece stack.

I’ve heard that adding a 10 MHz Reference Clock to the Vivaldi Clock could bring substantial improvement to SQ.

Is this true? Does anybody have real life experience about this? How does it work? Cost?

Hi All. I hope it’s okay that I am starting this new topic. A previous thread on this topic is currently closed due to devolution. And we have a lot of various discussions on this topic scattered around a number of cable and clock threads, with some exceptionally helpful info from James here and here, but no specific place to discuss current reference clock options and member activities. I and others have posted in some of those other places experiences with the Cybershaft, Mutec, Abendrot, may…

(Short version of my own experience: SRS Perf10 was a worthwhile improvement. Not as big as the Rossini or Vivaldi Clocks themselves, but enough for me to keep it.) 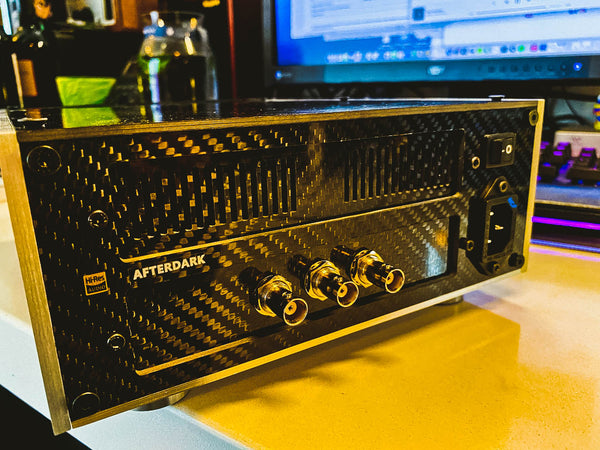 It is true that this is not a 10Mhz reference clock, but from the description it looks like it can improve the sound of, for example, Bartok or Rossini Dac. Can any of your colleagues write something more about it? Or maybe someone has one and is satisfied. Best Regards Robert

Does anyone know the Aurender mc20 external clock?

At an apparent MSRP of $30,000! it looks to be targetted at users wanting both the 10MHz Reference and Word Clocks combined into a single unit. The 10MHz Reference clock specification doesn’t seem to be as good as the SRS, Mutec, or even the Cybershaft.

Thanks Anup! Which one would you recommend among the names that you’ve suggested?

Well, adding a 10MHz Reference Clock to your dCS system won’t have anywhere near as big an impact as adding a dCS Clocks to the system to begin with, so, don’t expect any kind of “night & day” difference.

My suggestion, just pick either and give it a try; they both have pretty good re-sale value, you’ll be able to dispose of them very easily if it makes no discernible difference you can hear.

Anup, at that price point, why forgo a combination of dCS Master Clock (much less expensive) and separate atomic or GNSS clock that supplies the sort of reference signal a dCS master clock can use?

Anup, you are a person who can compare the parameters of clocks. Please tell me about the parameters of the clock that I described above in the post: PROJECT CLAYX GIESEMANN WORD CLOCK X 10M MASTER CLOCK FOR DCS.
Thanks a lot for your help Robert

Of course I understand, I didn’t want to break the netiquette. I could learn a lot from this forum and receive help or valuable tips. Robert

…at that price point, why forgo a combination of dCS Master Clock (much less expensive) and separate atomic or GNSS clock…

Greg, quite right. Plus there’s absolutely no substitute for dCS’ Clock Dither function; which in my opinion makes a definite audible difference, much more than the 10MHz Reference Clock does in my system.

Please tell me about the parameters of the clock that I described above in the post: PROJECT CLAYX GIESEMANN

Robert, actually I would have preferred to say nothing

, but since you asked directly, my very personal opinion is to not waste your money with that hobbyist (“DIY”) product.

Thanks Anup. Not a cheap exercise if you then need to add quality power and digital cables

I purchased a clock from AD for a non dCS application and I was completely underwhelmed by the construction “DIY” quality and unverifiable performance. For all I know it’s a box with a wire in it.

Do you mean Uptone EterRegen? I am currently using this device with Bartók and it works great but apparently it works even better with the AD clock.
Best Regards Robert

I did use it with an EtherRegen. The contribution of the clock wasn’t particularly apparent in my system. The EtherRegen ran so hot that two heat sinks on both sides couldn’t keep it cool. I moved to a Waversa Bridge,Standard. I constantly had ROON dropouts until the switch was replaced. My system is now completely stable and ROON never drops off.

EtherRegen in my system works great. No interruptions to streaming from my NAS. It is indeed warm, but until it exceeds 60c, there is nothing to worry about.

Hey guys. A sales rep at Mutec just told me that I won’t be able to connect directly a Mutec REF10 SE120 to the Vivaldi Clock and that instead I would need two MC3+ USB paired with a REF10 SE120 because of the 2 Wordclock inputs which are 44.1khz and 48khz. Does this make sense? Thanks. Franco