dCS is pleased to announce the release of dCS Mosaic 1.1.1! Mosaic 1.1.1 will include a host of improvements and new features available to all dCS owners, as well as a new innovation, dCS Expanse, designed specifically for owners of our Bartók Headphone DAC. All customers running Mosaic are encouraged to update to this version at their convenience. Mosaic 1.1.1 will be available for download on 21st December at 10:00am GMT. More information on the changes in dCS Mosaic 1.0.1 can be found in t…

Music is playing, so it worked

Now I try to find out what Mosaic Expanse is… 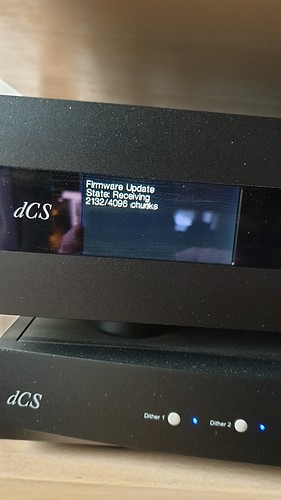 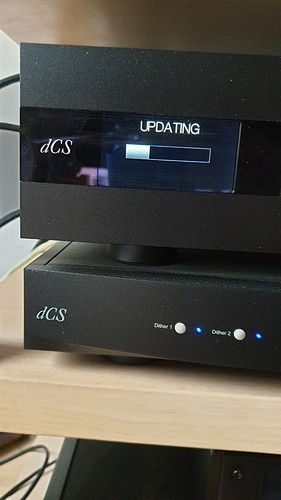 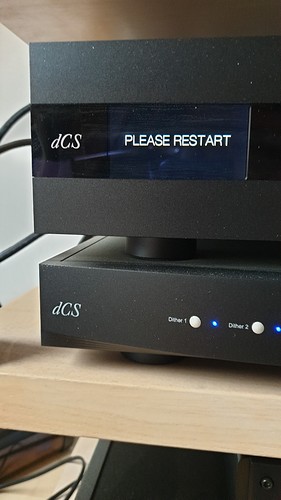 Restarted by power cycling with the backside power button. 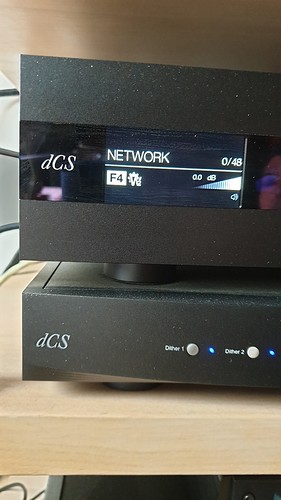 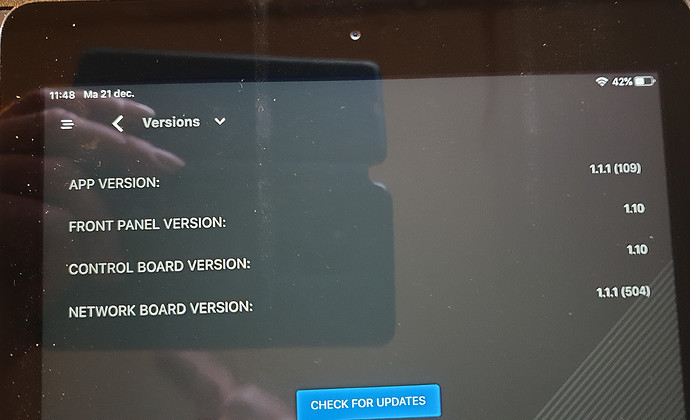 For anyone interested, we have a white paper on the dCS website which explains dCS Expanse - the why, what and how. I’d definitely recommend having a read.

In short, Expanse is a feature for the Bartók Headphone DAC Amplifier that utilises cross feed to shift the perceived sound source with headphones from inside the head to in front of the listener. We deemed this a worthy feature for the Bartók as there is a growing imbalance between how music is monitored during recording, mixing and mastering - on loudspeakers - and an ever growing number of users listening to music on headphones at the playback stage.

Instead of adding in artificial reverb which was not present during the production of a track to combat this issue, Expanse aims to preserve the reverb of the original recording while applying cross feed. This brings the soundstage more in line with what the engineers would have been hearing during production, without doing so at the expense of the spatial information of the recording.

We’ve also put together a TIDAL playlist featuring some featuring some recommended reference tracks to help you discover Expanse’s potential, which you can access here: 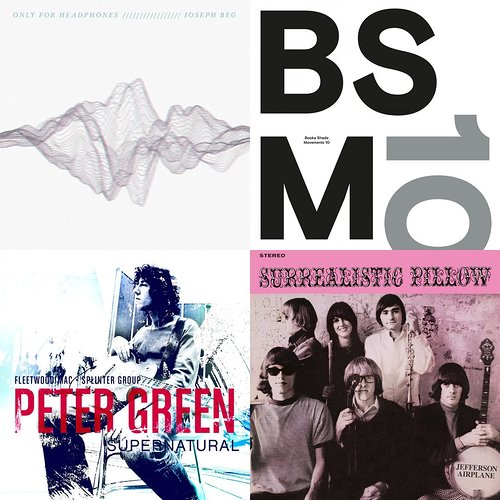 Listen to dCS EXPANSE on TIDAL

James, if I’m not mistaken, there’s a typo on the first page of the whitepaper; paragraph 3, first sentence has an extra second “not”

Mosaic Expanse is initialised through the app: Audio - dCS Processing Platform - 4th item: Crossfeed. Tapping the blue Off will show you HEADPHONE CROSSFEED at the bottom, where you can choose from: OFF - ON - EXPANSE 1 - EXPANSE 2 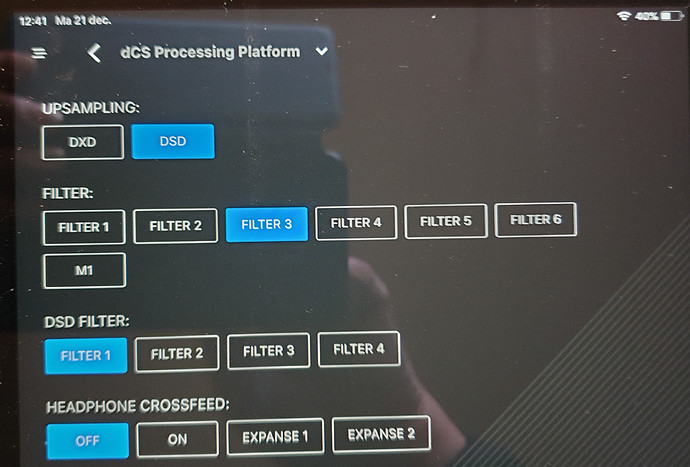 The display shows new icons, according to your choice: 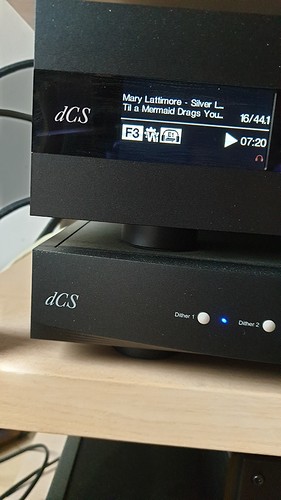 Drat, you spotted it before we got a chance to quietly address it in the background. Well caught!

I had a couple of issues installing the network board update (Vivaldi) . The first was that the download would not verify producing a " Contact dCS" message. This was solved by a hard reboot . Once rebooted and the installation tried again the verification and installation went OK until the end when I got a message asking me to manually reboot ( it seems that it should have done this automatically). All was fine subsequently.

I thought I would post this in case anyone encounters similar problems as the solution was straightforward.

I had similar niggles, my Bartok displayed “CHECKSUM!” at one point. All ok after a couple of attempts and hard reboots.

Looks like problems playing dsf tracks (not playing albums from the start, skipping to later tracks, often having to hit play 2 or 3 times before it will start playing) isn’t yet resolved so I guess that was identified too late for this release - maybe James can comment?

Mike, you’re correct, we didn’t get the .dsf skipping issue resolved in this release. We have a number of fixes in this release which we have been keen to get out for some time now, and the .dsf issue has proved a little tricky in nailing down the cause of so far. Definitely still on the radar to get resolved.

Thanks for confirming James. I’ve only had a little play so far but the dsf issue seems to be worse - I’m not sure if that’s possible (I.e. I’m not sure if the changes in the new release could have had a further effect on dsf files) so will try over the next few days and let you know.

Can the Expanse feature be added to the Rossini and Vivaldi? I listen to headphones the vast majority of the time and would love this. Regards

And I had the same update problem with the Rossini. First two attempts didn’t take - until I did a hard reboot. The subsequent attempt did succeed, except that Mosaic timed out waiting for the reboot, suggesting a manual one. And it seems a soft one sufficed because I now see version 504 in the network card.

I gave my Bartok a hard reboot before I got the update started, as @James suggested.

So far, so good (it’s still updating), though it isn’t yet complete, and it hasn’t been without its hiccups.

First it said that the Bartok should have rebooted itself (as happened for @PAR), but when I gave it a few more minutes without one it had moved from the network board update to the firmware update, which it’s chewing through now (halfway done).

Assuming this finishes happily, my advice would be to get it started and enjoy some coffee in another room for 15 mins or so. When you come back you’ll be relaxed, caffeinated, and will have delayed the onset of a new wrinkle or two

What’s that saying? “A watched DAC never updates.” Or something like that.

Delighted to have Playlists sorted. Excellent stuff and thank you to the dCS elves.

PS what about alphabetical scrolling?

Love the update, the ongoing investment in the software, and Expanse. It really works. I tried both Expanse 1 and 2 and preferred one or the other on different tracks. Someday, would love a description of the difference between, without divulging any IP of course.

The Bartok is one of my most favorite purchases in 2020! A happy-making light in an otherwise bleak year.

I’ve updated. Nothing in it that I can see is useful since I only use Mosaic to select filters etc.

Updated my Network Bridge after reading this thread, hard powered it off then back on and update installed.

Since theres no display on the Network Bridge, the information could be far more useful on the status of the update, e.g. percentage complete?

It would be a beneficial feature to be able to dim if not turn off the Network Bridge power indicator led as luminous blue is like a lighthouse light across my lounge, why is it so bright, that’s not even with listening to music with my lounge lights dimmed :-).

It has been a couple of hours since I triggered the update on my network bridge & the indicator is still blinking so not sure if it is still in progress or something messed up. How long does the update usually take to complete?