Ive purchased a second hand DCS Elgar with Purcell and im very happy with it.
There’s only one thing I don’t understand, the Purcell doesn’t have a standby button?
Is it possible to set it in standby so yes, how can I do that.

Oh, that’s a blast from the past and I am very pleased to learn that it is being used happily.

dCS equipment doesn’t have a button called "standby. Instead it has two power controls. There is a switch next to the power inlet receptacle on the rear panel. This switches the power on/off in the fullest sense of the phrase i.e it disconnects the box from the mains.

On the front panel is another switch ( button) labelled “Power”. When this alone is operated it first puts he equipment into sleep made. This prevents the unit accepting operational instructions and turns off the display. So this is effectively standby. The unit should still display a ( green if I remember correctly) LED . A further press switches off the unit. The remote IR supplied will carry out the same function instead of a manual press.

It is now 12 years since I owned an Elgar/Purcell combination so I am trying to remember this all. It certainly applies in respect of models thereon but I think that this first generation domestic model behaves similarly.

I trust that you have the user manuals for the units as they are complex to operate e.g .making the correct choice of wave shape for dither . They were basically professional studio items put in a nice case for home use.

Thank for the quick answer.
But mine hasn’t got the power button on the front so that’s why I asked the question, of course it have the power switch on the back, but I like my equipment to stay in standby modus when not in use. 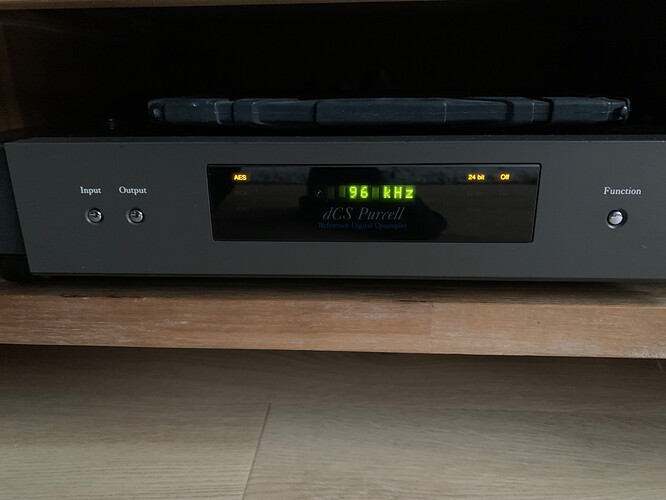 OK I have looked further into this and with Purcell the standby button is on the remote control. ( user manual p.41). The remote was supplied with Purcell Plus but was an optional extra with Purcell.

Purcell Plus was a later iteration of Purcell but the Plus new hardware could be installed as an upgrade to the original Purcell ( as was mine). I don’t know which version you have but it can be checked as Plus has DSD and the IEEE 1394 ( firewire) connectors.

Whichever it looks to me that either way you need the IR remote.