Back in July 2019 there was a thread concerning the display of classical music from Qobuz where albums containing works from various composers were displayed without the composer being identified. This meant that the work could not effectively be identified as classical music usually does not have “titles” as in popular music but only a description of form and key.

Hi @Andrew An update on this issue. Interestingly, the Qobuz iOS and Android apps showed the same issue until last week. This is a screenshot from an iPad 2018 running iOS 12 I took a few days ago: [PNG] The issue has now been resolved by Qobuz and the tablet apps now show the groupings correctly. When I made them aware of this issue, I mentioned that most Qobuz partners (with the exception of Roon) do not reflect the groupings correctly. I suggested to Qobuz that they contact their partners…

This no longer appears to be working.

Here are two screenshots, the first being of the information Qobuz supplies and the second the Mosaic display of the same. Here we have works by Elgar and Vaughan Williams but it is now impossible to distinguish them: 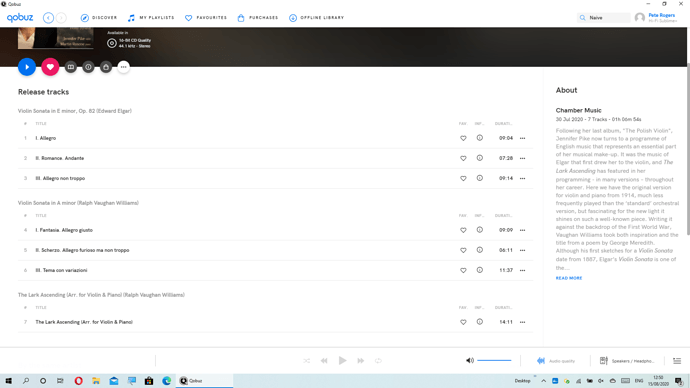 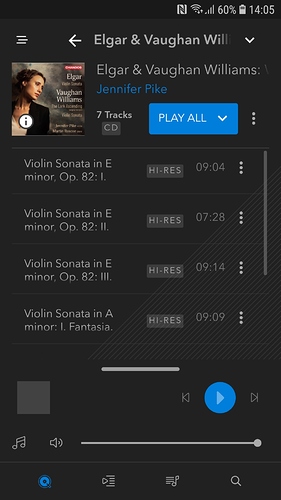 The Violin Sonata in E min is by Elgar and that in A min by Vaughan Williams.

Can the solution found in July 2019 be reapplied?

Sigh… looks like Qobuz is making changes again without telling anyone. We’ll get on it.

Andrew , I don’t know if this is of help but looking at several examples from the Qobuz catalogue it seems that the concatenation is still occurring but that not all wording is captured.

In all examples the composer’s name is shown by Qobuz in parentheses after the work description and it is those words in parentheses which are cut off e.g.: