Hi
I am attempting to set up a GeerFab from my Oppo 205 to the Rossini Dac but am. Not getting any signal output from the Dac.
Connection is via HDMI ( audio only ) from player to the device / out coaxial spdif to Rossini’s coaxial input #1. The display of Dac shows that input selected as well as DSD. On this input the Rossini selects Audio synch automatically. I’m not understanding entirely the dCS’s clock synch. scheme but from the forum one should be able to play music in this synch mode. Unfortunately I am not getting any signal out of the Dac.
Any suggestions ?

Just how are you converting HDMI audio to electrical SPDIF?

What shows on the display of the Rossini DAC when you try playing a CD (not an SACD) on the Oppo? (Can you take a photo of the display when the disc is playing?)

Phil
As I mentioned in my email, I’m using the GeerFab device they make one product - the Digital Breakout Box / D.BOB
It’s a device that received several comments on this forum when it was released in November of 2020.
It converts an SACDs players output over HDMI to the DSD over DoP via its two spdif outputs, optical or electric and into the dacs input. It does have a clock input.
Everyone was able to use it with dCS dacs but without the external clock.
My clock was set to standby mode while trying to use it. As I said the Rossini automatically switched to Audio in clock settings.

Heads up: dCS Rossini does not like the GeerFab D.Bob Support

I’m not sure who is at fault here, the D.Bob or the Rossini, but when connected about once per second for the briefest fraction of a second the Rossini will see the signal as 24/176.4 PCM rather than DSD as denoted by the front panel display, and will switch modes/filters; this will be accompanied by a “tick.” This happens so quickly the only way I got a photo of the 24/176.4 screen was to take a video and grab a still shot of the frame showing the PCM signal. This means at first listen the so…

I’ve also sent help message to that company but you were the first to respond.
FYI- I purchased a used Scarlatti a few years back from dCS to replace my Oppo player for SACD playback, honestly the Oppo easily outperformed it.
The sound from the Scarlatti was completely lifeless. Whatever it wasn’t doing ie. soundstage, sparkle, resolution, the Rossini couldn’t revive it.
I don’t mean to belabor this but it became an $11,000 headache as it went back and forth four or five times to US warranty service without ever paying off sonically. The repairs restored function but the sound remained dull.
If I could put some of that money into the APEX upgrade I would but it’s been on the market for months now.
Despite the ongoing warranty issues John Quick would not entertain any kind of return. So forgive me for feeling a bit aggrieved for first trying a DCS transport. I was open to trying this break out box to make more use of my Rossini, to see if I could improve on the Oppo.

To clarify, the D.BOB does not have an input for an external clock, which is what causes the timing issues that cause a click if you try to use it it wordclock mode rather than Audio mode.

As I also mentioned, even with the clicks, the sound quality was clearly better in Word Clock mode than Audio mode, so it made no sense (for me) to keep a device that could only be used to produce sonically degraded audio.

However it should be producing audio, so double check you are using the correct settings for the signal being sent to the D.BOB and the correct HDMI output; for the 205 you should be using the Oppo’s “HDMI (Audio Only)” jack.

Finally, you may want to try an alternate HDMI cable.

Bill,
Thanks for asking. The owner Eric Geer contacted me today and we thoroughly reviewed my set up, he has the Oppo 105, I have the 205 player. Unfortunately the problem persists. I have a new Audioquest Carbon cable,
it’s possible that it’s defective although if it were I’m not sure why my Rossini display would be showing DSD with no connection alarms, just no sound. 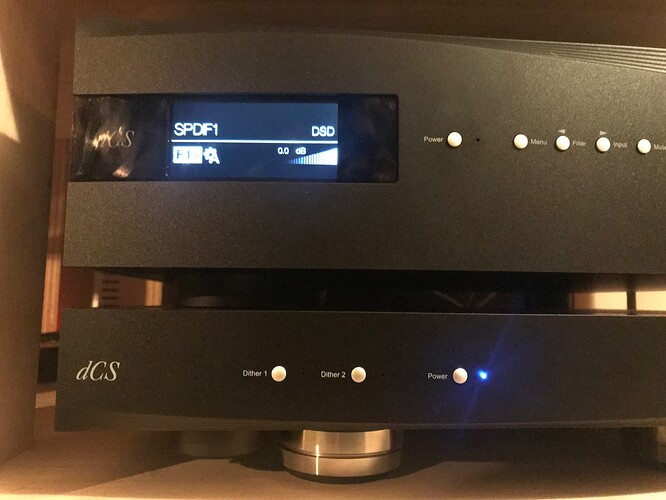 We did discuss the difficulty for those using external clocks ( myself included ) and he said he is planning on an updated version although that would be about three years out.

So I’m hoping that dCS can with the help of Eric Geer, work together to help isolate this issue for me as it seems others have not had a total loss of signal.

Also Phil,
I did get help from Eric Geer at GeerFab but to no avail. Without further input from dCS, we are unable to continue to search for the cause of the issue. Eric suggested that I email tech support including him so he can be onboard.
Does that sound alright ?

Stupid question, but have you tried TOSLINK just for fun?

It could be a flaky output on the D.BOB as well.

As far as DSD, I will say that I have seen situations where enough data is being passed for the DAC to detect it as DSD but not enough for audio to play - strange but true.

Will your Rossini see PCM if you play a regular CD in your Oppo? How about if you set the 205 to play the CD layer of the SACD? Do you see PCM or DSD, and do you hear audio?

Is the main HDMI output of your 205 connected to an HDTV and set to output high resolution video?

This is also important; from the 205 User Manual:

If you use HDMI to connect audio to an HDMI A/V receiver or audio processor, it is important that you choose 720p or higher HDMI output resolution when playing high resolution audio content (DVD-Audio, SACD, Dolby TrueHD and DTS-HD Master Audio). According to the HDMI specification, the bandwidth available for audio is proportional to the total bandwidth used by video. At 480p/576p resolution, the HDMI specification can only support 2 channels of audio with high sample rate (up to 192kHz), or 8 channels of audio with standard sample rate (up to 48kHz). If you play high resolution audio content at the 480p/576p resolution, you may get reduced audio resolution, incomplete audio channels, or even no audio/video output at all. Choosing a higher output resolution such as 720p or above allows enough bandwidth for all high sample rate audio channels.

You are more than welcome to email [email protected] and copy in Eric if you wish.

I’m sorry if you have had previous issues - unfortunately I’m unable to ask JQ for any history as he is no longer with us and it wouldn’t get us anywhere with resolving this issue.

I’m not sure if I missed it in your replies above but what happens if you play a CD rather than an SACD in the Oppo (just trying to identify where the issue may lie by seeing if it’s an issue with only DSD or whether it’s an issue with both PCM and DSD) so getting an answer to that question would be really helpful to moving things forward.

Is the Rossini on the latest firmware? If you do a check for update on the Mosaic app what does it say? Perhaps you can take me a screenshot of the “Versions” menu from the Mosaic app?

Phil,
Well I think the update did the trick ! According to my screens I’m now listening to DSD through my Rossini for the first time since I pulled my Scarlatti out, more than two years ago. Thanks for your help.
So I’ll start by just listening and then going back and forth between cd and sacd layers to hear how they’re qualities differ.

As for the Scarlatti Phil, after months of sorting out the functional problems, I always wondered if the sound that I was hearing from it was how a Scarlatti was “ supposed “ to sound. Board parts and clocks were replacement etc. Might there have been something else in the digital audio path that may have degraded without affecting it functionally but had a negative impact on the sound quality ? My dealer said they had not used any transports in their setups so were not in a position to judge.
It’s a bit of a nagging question that I’m not sure how to resolve. Of course the “ work around “ is now working for me, but that question remains for me as well as anyone who may eventually want to purchase it. My dealer has the unit in Omaha Nebraska and I have since moved to New Mexico.

Hi Bill,
I’m having success now, I think because of the update. As to your question, and Phil’s, yes I was able to play a cd. I tried it this morning, though the Oppo alone first with success and then also out the Break Out Box successfully. But still no DSD after rechecking my Oppo settings, they were as you suggested 1080p.
That’s when I did the update and was successful.
Although I’m not sure the best way to select only the cd layer for comparisons. The Oppo seems to select the sacd in auto. Do I have to go into audio settings and change the SACD output to PCM every time I want to switch ? 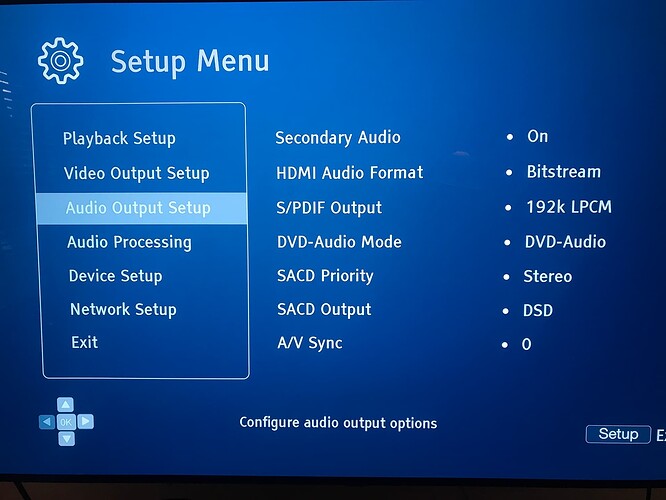 You will need to change the “SACD Priority” menu setting to “CD Mode” to manually select the Red Book CD layer.

You don’t want to just change the output mode or the player will internally transcode the DSD layer’s DSD to PCM.