Being a complete computer ignoramus can someone please advise me to which field in MinimWatch I need to add a text string to add “track number”. Do I also need to add Track Number to Index tags on the server page? What text should I add?

I can recommend https://forum.minimserver.com/index.php
for a good answer.

Thank you for your response. Unfortunately the MinimWatch forum shows no matches for a query involving track number except for the opposite of what I want. It shows a query on how to stop showing track number. The answer is basically that this would cause all sorts of problems implying that the default is for track numbers to be displayed. In turn that suggests that although Minim’s default configuration will result in the display of track numbers they cannot be displayed with Mosaic. Is this correct?

BTW one reason I mentioned my lack of computer expertise is that advice in the user guidance as written by the developer Simon Nash is not in normal English but only as technical jargon ( albeit presumably correct). So “Hello” may as well be rendered as “Reveal greeting syntax to Object. True”

. It may as well be in Sanskrit as far as I am concerned.

Pete — I’m not a user of Minimanything, but have I understood correctly that the thing you’re trying to do is have track numbers from music fed from storage > dCS unit via MinimServer show up correctly in your Mosaic remote?

If so, I’d have thought as you do that they should show by default, rather than need you to do anything. Do track numbers show up for any of your local files? I know that there’s more than one way to record certain metadata fields (track number being one of them), and thought that this could be worth investigating.

Here’s what I mean (from the developer of Yate, which is Mac-only, but the contents could still be of interest — he was helping me troubleshoot missing track numbers from certain files):

dBpoweramp does some strange things as far as pseudo standards go. For some reason they’re writing the track number to a TRACK UDTI when almost everyone else uses TRACKNUMBER.

Ben , I see no track numbers for anything. Checking the ID files from dbpoweramp rips there is a field called " Track" with the track number out of the total displayed e.g. 1/12, 2/12 etc. if there are 12 tracks in the folder. Looking at other non-ripped but downloaded files from various vendors they may just show “Track” as 1, 2, 3 etc but others use the same 1/12, 2/12 protocol as dbpoweramp generates . However in no case is there any display of this field in Mosaic. Only track title, artist and duration.

Moving away from local files track numbers are not displayed for other media e.g. albums from Qobuz though the fields are populated as track number is displayed in their desktop player.

So it seems to me that Mosaic simply does not display track numbers ( pretty basic omission in my view) . Are other members seeing them ?

Hmmmmmm. OK, so it’s unlikely that the issue is your files — the chances of your rips AND downloaded files having the same problem are a bit small. Unless you’re processing all of the files using Arrange Audio or some other dBPowerAmp plugin. I did that to make sure that the filenames were all consistent in format. What fun that was! Are you doing anything like that?

As dim as it makes me feel to type this, here goes! How can I test this to see if I have the same problem? I’m a Nucleus/Roon user who uses Mosaic only to diddle with my Bartok’s settings, not to play music.

For what it’s worth, here’s what I get when I stream an album from Qobuz in Mosaic. No track numbers. (This would drive me nuts.)

This would drive me nuts.

Me too. And it’s the same with Mosaic pulling from a Plex UPnP server with all my local files. This strikes me as sub-optimal. 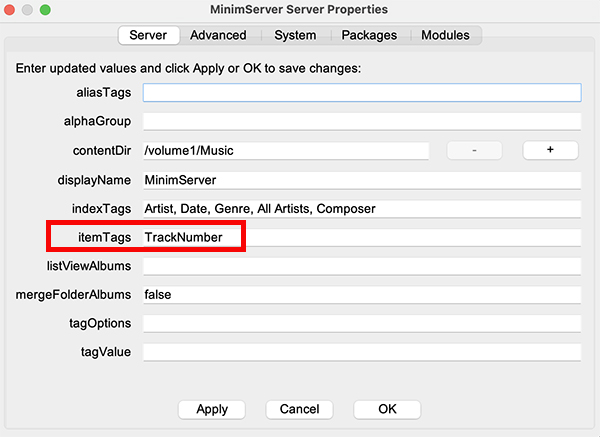 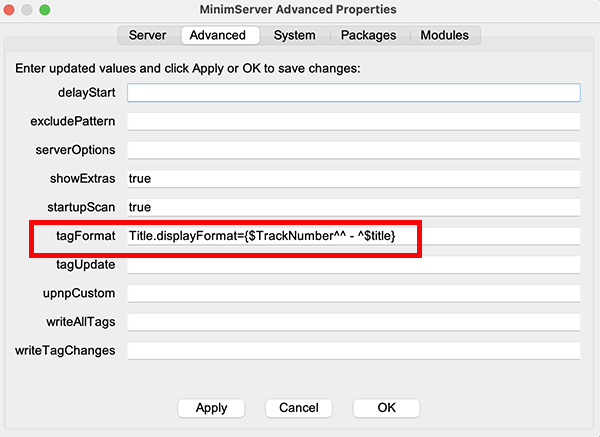 Well, here’s another comment from one whose Latin is as bad as his Sanskrit

I tried the above and got it to work in MinimServer after adding the field names to the category Index Tags. However, the track numbers did show only when using BubbleUPnP to read MinimServer, not when I started and restarted dCS Mosaic. So PAR, you might have a point there! Maybe it is Mosaic that won’t show the numbers!

Thanks Anup. Yes, very unintuitive. I believe that someone who makes a product for the consumer market should not expect his customers to know how to code. In fact I have been put off installing MinimServer/Watch2 so far on account of the fact that I cannot make head or tail of Simon Nash’s configuration instructions.

Anyway, success! At least with my local files. Maybe the API from Qobuz does not include provision for track numbers but that does seem counter intuitive. Perhaps someone from dCS could comment?

Thanks Göran. In my case having entered the code into MinimWatch I have now got track numbers for my local files using MinimServer and viewable in Mosaic. Did you rescan? No Qobuz track numbers though.

…In fact I have been put off installing MinimServer/Watch2 so far on account of the fact that I cannot make head or tail of Simon Nash’s configuration instructions.

The exact same feature on dBpoweramp’s Asset UPnP is a single graphical check-mark configuration (albeit, some default override settings need to be manually edited out to get it to work properly with Mosaic

As a long-time Minim user, who understands Pete’s frustration, I have to wonder why dCS settled on Minim as its only supported UPnP server. In my early days with Minim, I corresponded several times with Simon. He was very helpful, and I gradually forced myself to learn how to get it to do what I wanted it to do. I implemented Minim on several different servers. It’s a very robust system. But it’s not a “high-end” polished product. Another illustration that UPnP is anything but. It seems an odd place to push users investing in dCS kit.

Another illustration that UPnP is anything but. It seems an odd place to push users investing in dCS kit.

dCS is not the only high end manufacturer to go with MinimServer. Melco made it their default choice of UPnP server too.

With established companies like these becoming involved would it be improper to suggest that they should provide input to this one man band operation with a view to improving their customer’s experience of it and thereby enhancing their own products’ reputations? IMO it desperately needs development of a more sophisticated user orientated GUI.

Agreed Pete. How hard would it be to have a consortium that provided a reliable foundation for a small shop of programmers dedicated to a robust server/client platform? I am a fan of hive development. But we need a properly supported beekeeper. Or give up, and support/implement a Plex or Asset or whoever. Roon doesn’t have to be the only choice, and Minim ‘a current state shouldn’t be the only alternative. Would have to cost less overall than what each company expends now to be siloed.

dCS is not the only high end manufacturer to go with MinimServer. Melco made it their default choice of UPnP server too.

It’s a pity Melco had to abandon Twonky; although perhaps not as flexible as MinimServer, it’s software architecture was, IMHO, better, even supporting REST API/JSON based control (ironically, very much like how Mosaic itself works with dCS hardware).

Unfortunately, Lynx Germany got shutdown in Oct’2018 where the Twonky development and support teams were located, so not surprising that Melco was forced to find an alternate commercially supported embedded UPnP stack.

Maybe the API from Qobuz does not include provision for track numbers but that does seem counter intuitive. Perhaps someone from dCS could comment?

It would be the APIs from airable, rather than Qobuz; album browsing and list responses come via airable APIs.

It’s a pity Melco had to abandon Twonky;

You seem to have a better memory of Twonky then I do. I found it rather poor combined with Mosaic given its inability to distinguish albums of similar titles e.g. “Close Your Eyes”, one by Kurt Elling, and “Close Your Eyes” by Stacey Kent . It just decided that they were the same so it picked the Kurt Elling artwork for display then mixed up the tracks from both albums for play. Likewise it would display four of the five different versions of Symphonie Fantasique that I have but with the fifth MIA. Eventually I found it appended to one of the others. There were also numerous other MIA albums no doubt sandwiched with other titles but impossible to locate. Plus, of course, incorrect artwork etc.

It would be the APIs from airable, rather than Qobuz; album browsing and list responses come via airable APIs.

No doubt Twonky had some major issues that needed fixing

, my biggest bugbear was that it would refuse to show some cover-art no matter what I did. Actually, my Melco N1A is still running Twonky (despite having updating to Melco latest release which supports MinimServer natively).