Hello, I have an Audia Flight Strumento No4 MK1 power amp with input sensitivity of 1.41 Vrms. Should the line output of my Bartok be set to .6V or 2V? What is the general rule to follow? Thank you

To calculate yourself, for other voltages, you could use this:

Thank you Erno, I appreciate your advice

Bartok will only output the line voltage selected when the volume control is set to 0.0dBfs AND the file, or part of the file, being processed has also been mastered at 0.0dBfs. That is not normal using commercially produced recordings. The mean level of most recorded music will be lower than 0.0dBfs as mastering engineers usually keep a few dB in hand to avoid digital clipping during peaks . In some music genres such as classical that have a wider dynamic range than e.g. pop/rock the mean average modulation level of the recording will be well below 0.0dBfs . Where it may get close to that figure during the absolute peaks of double forte passages the duration may in fact last only for fractions of a second and may be easier to see on an SPL meter set to fast response than to actually hear.

So I reckon that in practice you would be unlikely to drive your amp into clipping with a maximum 2V output selected on Bartok. In any case you are connecting a power amp directly so you will be using Bartok as a preamp. You will find that in practice you will not set the volume control output at 0.0 but at some lower figure for listening comfort unless you want to set everything to flat out just to see how loud it will go

Thanks for the additional info Pete

I am finding that at 2V out and low to moderate listening volume, my volume control is anywhere between -48 to -30. My understaning is that the desired range should be between -30 and -10 otherwise there is too much attenuation. If not mistaken, should I run with .6V out instead of 2, and in what ways does too much attenuation affect the sound? Hopefully these are not silly questions, I appreciate the knowledge of others here. For reference, attached is a picture of my setup with Bartok as preamp to Strumento 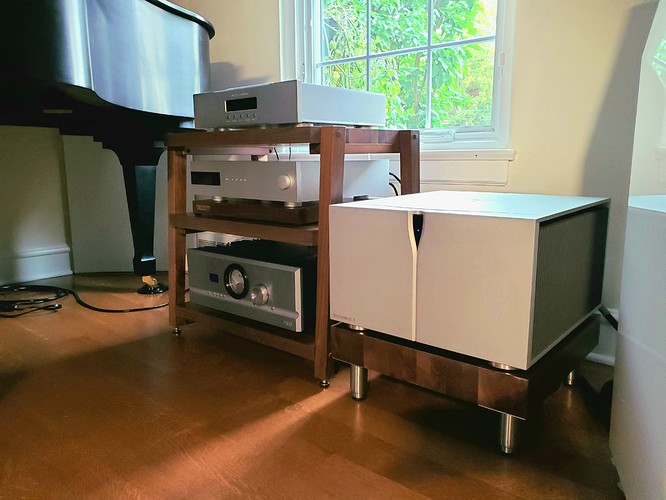 I ran into the same situation at low to moderate listening levels, and decided to use a preamp. Problem solved.

Great setup you have!

It looks like you have the Pass Labs INT60 integrated there. How are you using it?

If not mistaken, should I run with .6V out instead of 2, and in what ways does too much attenuation affect the sound?

In brief regarding sound quality:

.6V v. 2V. Probably inaudible, possibly insignificant. The only technical matter of significance is a slightly worse S/N ratio which I doubt has any subjective impact given the high S/N ratio to begin with.

-48dBfs v. -30dBfs. Significant. Digital volume controls work by lowering available bit depth. the concept of keeping the volume control high is to maintain maximum resolution and settings below -30dBfs mean that not only is resolution degraded but by the time you reach -48dBfs , severely degraded ( especially if you remember that dB scales are logarithmic).

Erno, thank you. The Audia replaced the Pass which is currently not hooked up. With the Audia I am hearing more low-level recorded detail which I like and the imaging is improved. Do you think adding a preamp and a second gain stage would sacrifice some detail, or should that not be a concern? Which preamp are you using?

Pete, thank you. It is as I suspected but with your explanation I understand why now

Using your Bartók at unity gain 0.0dB (so no variable pregain) at 6V out into a good preamp, which matches your Audia amp, and can handle 6V in, is worth trying.

The preamp I am currently using is irrelevant, so far as it is not per se matching your amp, but it anyway is serving me very well. People get upset here when I mention it (again), so PM me if you want to know

Anyway, my current setup is here: How do you partner your Bartok?

But it will change soon.

Erno, you caused me to do a bit of “sleuthing” to figure it out, and I discovered a few posts on Bartok and preamps that I should read (or re-read more carefully this time) to serve as my “benchmark” for future preamp decision

Mind you, you have a great amp, which may need another benchmark preamp. If you have the possibility, demo and compare.

I go Rossini, and since I listen mainly to headphones (this is my office setup), and go Abyss + Susvara, I am currently looking for another headamp/ preamp solution, to see if it is better.

Erno, I look forward to demoing and comparing options. My amp is new and barely broken in so I think it best to let it settle in before pairing it with a preamp just yet. I’ll be very interested to hear what you decide on for headphone/preamp solution and your impressions!

Alex, I also look forward to hear what you do next. But first enjoy your lovely Audia Flight Strumento No4 MK1.

Pete, I just switched to .6V line output and am in the sweet spot in terms of resolution. Thanks again!

Great Alex, it works, but last thing I heard from Pete is that he is using a preamp as well. No doubt, he will expain.

After about a week I switched back to 2V out as I hear an improvement is sound quality, even with the volume control at -42dBfs for low volume listening. Still interested in a separate preamp but that can wait

even with the volume control at -42dBfs for low volume listening

Of course although as the level lowers against a reference of 0.0dBfs resolution is normally lost with a digital volume control , at some point the sound level becomes too low to hear ( or appreciate) that loss. So it is kind of self compensating.

Yes I do use a preamp as that both simplifies some level matching problems and also ( IMO and in that of many but certainly not all) provides a sense of drive and “completeness” to the music that ( again IMO) outweighs any small losses that there may be otherwise.