Display off not working consistently

Hello DCS support, the display off feature of my Bartok is not working consistently. I have to reset it through the Mosaic app or on the device. After a period of time it will revert back to on, and the device setting becomes out of sync with the app. The logo display off does not have the same issue. Please let me know if service is recommended. Thank you 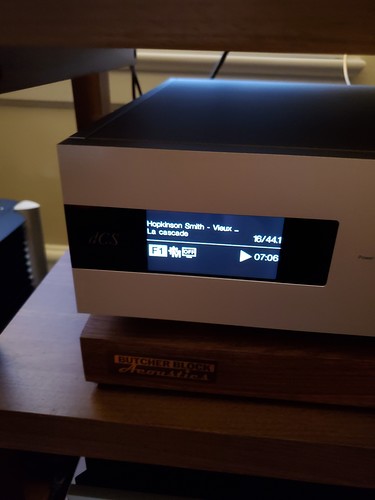 There were reports of this earlier in the month.

I have checked and can add that display off does not work with any of my Vivaldi components either. I was going to suggest that the same faulty coding may have been copied across the entire current range but no, it works fine on my Rossini transport !

So dCS guys : we appear to have an issue here.

Alex, it would not appear to me that a service would fix it as it looks like a generic software issue which would require an update to sort out.

Hi Pete, thanks for confirming. Let’s hear from DCS about whether this issue can be addressed as part of a future software update

When you go for standby mode with display off, and you will wake it up, display is on with a sign OFF. You have to move dB pot to make it off again or go to menu, choose display, do ON and OFF again and it is off again.

I have checked and can add that display off does not work with any of my Vivaldi components either.

Odd. I just happened to use the feature yesterday, and it worked just fine on all three of my Vivaldi boxes, both at the front panel and in Mosaic (but not for the Clock). I just confirmed again. It works from both the front panel and is reflected accurately and reversible in Mosaic. When off, it stays off, and vice versa. Am I misunderstanding the problem?

Greg, thanks for bringing this up as it made me go back to my units and re-check. I was wrong and they are now all working OK when switching off the display.

I justed checked again and the Mosaic display off control does not turn off the display on my Bartok. The logo display off works fine. Apparently this is not the same experience across all dCS products and for all users, but the issue remains. Thanks

I have started turning the unit off at the back and when powered back on it correctly remembers the state of the display off. This leads me to conclude the issue only occurs when putting the unit in standby mode and adjusting the display settings through Mosaic. Thanks

This reminds me of being more successful at certain pubs as opposed to others. Just as unpredictable.

Greg, I see it was my reference to putting the unit in standby mode that got you thinking