The Lina is quite an investment . There is so much on line about power conditioners and the like it’s beyond confusing.

I have a straight forward question for anyone at DCS. Should my system plug directly to a wall out let or to my Panamax 5400-PM. I want to protect surges yes for sure but don’t want to impede performance. I realize there are lots of specifics via systems etc. But in general what’s the deal with plugging directly into the wall ??? The more I read it seems the more confusing…some say you guys recommend going directly into the wall outlet…is that the case?

Our products are all designed to handle normal mains supplies without being affected by the various dips, sags and glitches that are always present and we would advise that our units are used directly plugged into a normal wall outlet.

There should be no need to use a mains conditioner or regenerator and there is always the possibility that using one could adversely affect the performance of a piece of audio equipment instead of improving it - of course we are aware that people do like to experiment and tweak in this hobby and should you feel that the performance of your unit is improved by using it on a mains conditioner or regenerator then it is totally your prerogative as to whether you use one.

Similarly surge protection is generally quite ineffective on most consumer grade mains filtering devices so again this is a function which may not be of huge real world use (certainly most surge protection would be easily overwhelmed by a nearby lightning strike).

So in summary I would recommend using any of our units plugged directly into a wall outlet but the option is there should you feel you wish to do otherwise - however be aware that should any damage be caused to a dCS product by a faulty mains conditioner or regenerator then it wouldn’t be covered under warranty.

@Phil Thanks for your explanation.

However, at HighEnd Munich 2022, dCS demoed with a Transparent Audio PowerIsolator, see photo, on bottom shelf under the Vivaldi’s 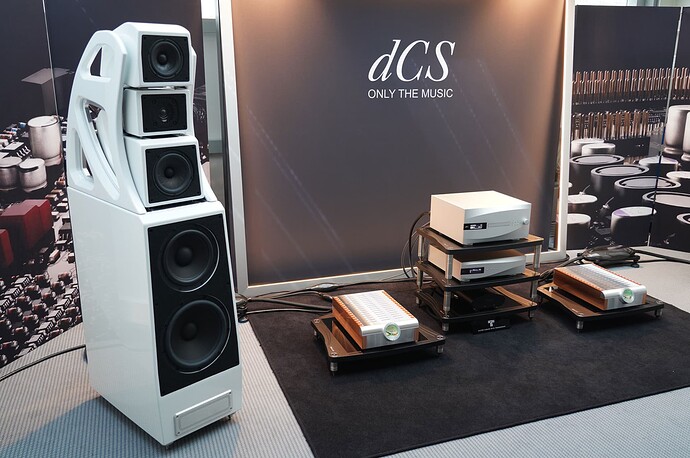 Can’t tell you how much I appreciate your quick candid response to my question. I have a surge protection unit on the home at the meter supplied and installed by the power utility. I have ordered a hospital grade PS audio wall outlet to replace the builder grade outlet and will plug the amp directly.
Thanks again.

Erno, do dCS and Transparent share the same distributor as in the UK ? One can often find pairings of equipment at exhibitions that have more to do with business relationships than other factors. Not , of course, that I am suggesting anything here.

On cable front, dCS distributor Moremusic in NL also distribute Shunyata and MIT, but not Transparent.

Thanks Paul. Of course I now see that Erno’s picture is from a Munich show where I think that the room may have been directly booked by dCS rather than the German distributor.

Anyway my main point is to be reasonably sceptical about why certain combinations of equipment may be found. It doesn’t often indicate that a technically or aesthetically optimum combination is necessarily on show even if I acknowledge that this setup is very good. Overall not to my exact taste however.

One can often find pairings of equipment at exhibitions that have more to do with business relationships than other factors. Not , of course, that I am suggesting anything here.

Yes, it is only about the money, not “only the music”

Phil, on another issue. My Lina is direct plug a/c now and direct connect ethernet wired. Lately Mosaic seems a bit unstable. It takes a while to recognize the Lina and the screen jitters sometimes. All my other ethernet connections are fine including when using Roon or Qbuz?

checking update indicates there are none missing?

If it’s taking a while to connect to your Lina DAC then this is usually down to the underlying network - usually reconnection takes only few seconds when the app is brought up.

Phil, I posted a couple of weeks ago about the LINA DAC acting weird…today it won’t power on at all. below is a copy of a message I posted today to someone else having a power issue. This is really concerning experiences for a product of this cost in the first few months. ???

Hi, today I have the exact same issue for the second time. A back in August my DAC screen went grayed out and I had to have the unit replaced. This system is too much of an investment to be having to be dealing with issues like this so soon it’s just months old???scared stiff we have an issue here? Im contacting DCS now