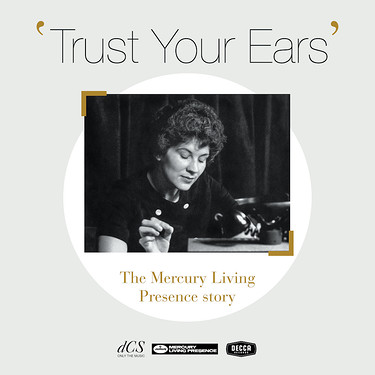 To celebrate the 70th anniversary of Mercury Living Presence, Decca Classics is releasing the entire digital catalogue on major streaming services, as well as reissuing a number of titles on vinyl and CD. We’ll be sharing curated playlists via our social media channels, website and the dCS forum.

dCS has teamed up with Decca Classics to create a new project documenting the history of Mercury Living Presence - the pioneering label behind a hugely influential and much-loved collection of classical recordings.

Through documentary films, articles and a three-part podcast series, we’ll explore how Mercury Living Presence worked with leading orchestras in the US, Europe and Russia to produce a vast catalogue of music that is renowned for its remarkable sound quality.

We’ll also discuss the role that dCS technology played in the catalogue’s digital revival. Over the course of the series, we’ll be speaking with dCS founder Mike Story and Technical Director Andy McHarg about our move from radar to recording and playback, and the making of the dCS 900 - the analogue-to-digital converter that was used to transfer the Mercury Living Presence series to CD in the 1980s and 90s.

You can find out more about the project here:
https://www.dcsltd.co.uk/reviews/trust-your-ears/

And watch the first instalment of our short film series below: As posted here before:

Did you get an email from dCS? dCS Products

There are already many CD box sets available, I have f.ex set 1&2, so what‘s new?

We also uncover the stories behind some of the label’s most beloved and influential recordings, from 1951’s Pictures at an Exhibition (produced with the Chicago Symphony Orchestra), to its spectacular recording of Tchaikovsky’s 1812 overture, plus collaborations with Byron Janis, Frederick Fennell, Howard Hanson and the London Symphony Orchestra.

You can listen to the episode at trust-your-ears.simplecast.com

What has happened to “Trust Your Ears”.

dCS Edit says that the first episode (was) available from 12th may and that parts would follow at 2 week intervals. So Part 2 should have been up on 26th May. However nothing further appeared by the date of writing this on 4th June.

However the text introduction to the series on Apple Podcasts has the parts following at somewhat dilatory 2 month intervals. With that gap between them I will probably forget their existence.

So what is the correct story ?

In episode 2, we turn to the 1980s and the advent of digital audio to learn how the Mercury Living Presence catalogue was remastered for CD. Tom Fine explains how his mother, Wilma Cozart Fine, came to be working on the remastering project 25 years after retiring from the music industry, and mastering engineer Dennis Drake reveals how he and Wilma transferred Mercury’s vast collection of LPs to the digital domain. We also examine the role that dCS played in the remastering process, and the pioneering technologies that allowed Wilma and Dennis to preserve the magic of the original LPs. Plus, Rob Cowan and Michael Gray reflect on the Mercury catalogue’s enduring influence and appeal.

You can find out more and listen to the latest episode here: https://dcsaudio.com/edit/listen-to-episode-2-of-trust-your-ears-the-mercury-living-presence-story

In our third and final episode, we delve into the process behind an ongoing project to digitise and remaster the entire Mercury Living Presence catalogue and make it available on streaming services worldwide. Abbey Road Studios engineer Jared Hawkes talks to us about working on high-resolution digital transfers of the label’s master tapes at a purpose built archive facility in London, while Tom Fine tells us about remastering the catalogue for a new era and bringing Mercury’s evocative recordings to a wider audience than ever before. Plus, we look back at some of the musical highlights from the collection and reflect on its relevance today.

You can listen to the series at trust-your-ears.simplecast.com
Or visit dcsaudio.com/mlp to find out more about the project

Is there any release date for these new remastered albums? Thanks!

They are coming out in various formats. The CDs are being released as thematic box sets and the first from Eloquence ( Decca Australia based archive label) is already in the shops; the mono Rafael Kubelik CSO recordings. These are also now available on streaming media though note that although the transfers were hi-res these Kubelik streaming releases are 16/44.1. BTW if searching for them as streams they seem not to be collected as a box but as individual albums, at least on Qobuz - search for Mercury Masters. I understand that there may be streaming only releases - not everything will come out in hard copy form.

Further box sets will be released at intervals over the coming months ( with streaming releases alongside). If you are interested I would keep looking at the Eloquence web pages. Of particular interest to those of us who have a vinyl replay system there will be a number of LP releases of various works in Q4 this year. If you have not yet heard part 3 of the podcasts Tom Fine seems particularly proud of these ( especially the Firebird with Dorati) and is very complimentary about the half speed mastering cut at Abbey Road by Miles Showell. I am salivating!