Mosaic app on your Desktop 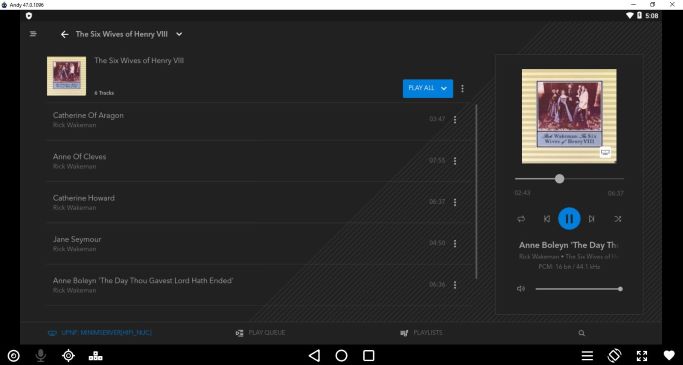 and it works extremely well. In fact it’s more stable and easier to use than on my android tablet. It will sit there rock stable, on all the time, which, tbh, is something I’ve never found with trying to use it in ‘always on’ mode on android. On android I found it slow (it’s faster on the windows emulator) and a bit clunky and despite all my efforts with various apps I’ve found it hard to stay on all the time.

I’m now seriously considering dumping the Android tablet and installing a Windows tablet, maybe a nice 12inch, and sitting that on top of the rack as a control interface.

Oh and the other advantage is I can sit working on my PC and change/select/play music… though, I suppose, that’s something all you smartphone users are used to

Presumably you are doing this by running an Android emulator on Windows. As there are several of these available which one are you using?

I have Mosaic running on both Android and iOS devices and have not found either clunky or slow or anything other than rock solid. So I wonder if the advantage that you have found over your tablet is related to the specific Android device that you are/were using and its wifi network connection rather than something that has a universal application?

tbh I’ve tried three different Android tablets, branded and not, and non of them seems to like me running with the app on screen and on 100% of the time. For a start it tends to go wrong when screen saver kicks in (which you can’t seem to disable on later Android versions). When coming out of screen save/sleep it would often play up. So I use an app to try and stop that from happening and it’s kind of okay for a while, some times a few days, but then occasionally it’ll crash. tbh I had the same issue with the NAIM app also tried on several tablets (two different Asus tablets and a no-name brand). IMHO I think operating systems like Android aren’t expecting the user to have the screen live and up all the time. I mean on the average phone the battery would go flat after a couple of hours so the OS expects the user to NOT have it up and running 24/7.

oh and this is over several evolution’s of my home network so new AP, new switch, new cabling, and nothing has changed this behavior.

The combination of having the Android screen switched on all of the time may indeed be a reason for your difficulties.

Both of my Mosaic installations are on devices with covers that switch off the screen when I close them. Once I have selected an album to play I generally do not need to look at the screen for, say, the next 50 minutes or so. If I do whilst the album is playing then I open the cover when I may need to enter an ID confirmation ( e.g. thumbprint). On the whole this works fine for me as I do not normally need to watch the screen for all of the time that any given album is playing. So I guess that my use conforms with Android’s expectation of screen time.

If I want to try out your Windows solution then , as I asked earlier, which Android emulator do you use?

He said it. I did see it too late, that is why I have withdrawn my post above.

I’d also love to know which emulator you’re using. I tried to do this and failed the other weekend because the one I tried runs in its own virtual subnet and could not access my local network.

Andy OS is an absolute doddle. I did the install leaving everything as defaults. When it had finished I went to the app store and registered with my normal credentials. Then selected the mosaic app. It did the download and install and then ran first time with zero setup.

So far, and I’ve been using it for a good 6-8 weeks, it’s given me zero hassle. I’ve had it up and running in the background on my Windows 10 PC non-stop. When I start my PC from dormant mode (after closing the lid I mean) it reconnects to the Bartok within a few seconds of the wifi interface being active. As I say, so far it’s been less agro than the Android tablet.

You might want to be careful with Andy OS, there are reports online that it installs a hidden crypto miner on your PC. Keep an eye on any unexpected GPU/CPU usage!

It doesn’t seem to be conclusive that it’s malware, but there’s enough worrying posts that I would stay away from it.

I was just able to get Mosaic running on the Genymotion emulator (which is definitely safe) but it was certainly not plug and play. It took me around an hour of research, configuration and debugging to get it working.

Reports I hear about this seem related to dodgy download sites for the Andy OS. If you go direct to to Andy for the install then I think your okay. I’ve been running Andy, on and off, for years now on both office and home PC and not had any issues and, as it happens, I was checking CPU usage a couple of weeks ago to diagnose a regular slow down and it turned out to be windows sending telemetrics… now disabled. Apart from that CPU usage seems to be fine with nothing unusual.

However warning taken on board and I’ll keep my eye out for this issue.