I have a question, or a request for advice, about approaches to upgrading in the case where money
is definitely a constraint. I’ve been a Puccini + Paganini clock owner for about 8 years, and my
efforts to squeeze more performance from the system are now down to minor but absorbing games such as playing around with cables. (The other elements of the system are Equi-Tech balanced power supply, which made a very large difference to sound quality; Benchmark HPA-4 as a pre-amp and headphone amp; and Bryston 4B “cubed” power amp.)

I don’t stream music, I listen to CDs and SACDs. And that is the problem: the lowest cost dCS equipment for playing SACDs is Rossini dac + Rossini transport (OK, so I suppose a Bartok dac could be
substituted), and the Rossini combo is close to a factor of 3 more than the cost of the Puccini. A little steep, for me anyway. A friend of mine has a Rossini dac + second hand Paganini transport and that seems to work well. However, transport quality does seem to make a difference (I wish I knew why): a brief listen at a local dealer showed that a Vivaldi transport into a Rossini dac was rather better sounding than a Rossini transport. But now I’m drifting beyond my price range, as usual…

What experience do Forum members have of unusual, and lower cost, combinations of dac and transport? And, for any ex-Paganini owners out there, would it be worth getting a s/h Paganini transport and dac, or is the performance now too far behind current equipment for it to be worthwhile? I want to keep the ability to play SACDs, which is quite a constraint. As an aside, I should say that I have copied all of my CD and SACD collection to hard disk, but from reading around it seems that it’s necessary to pay about as much for a music server that sounds really good as for a transport. And, anyway, I don’t want listening to music to become just another exercise in operating computers - I do quite enough of that at work.

I look forward to hearing other members’ suggestions and experiences.

I guess I am your man for this as I recently moved from a Paganini Transport to a Rossini Transport.

Incidentally and in respect of my response below there is a potential contradiction in your question. You say that “I don’t stream music, I listen to CDs and SACDs. " but also that " I have copied all of my CD and SACD collection to hard disk”.

I had the full 4 box Paganini stack from 2010 to 2018 when I mothballed the upsampler, bought a Vivaldi DAC and Clock but retained the Paganini transport for CD and SACD plays which had become less frequent as I had, like you, moved to mostly computer based replay ( then to Network Bridge , then to the Vivaldi upsampler which incorporates the network streamer ).

Sticking with the Paganini v. Rossini v. Vivaldi transports and using an arbitrary score, Paganini 5, Rossini 9, Vivaldi 10+. There is such large improvement of the Rossini Transport over the Paganini that I am still astonished every time I have a silver disc session ( mostly SACDs as nearly all of my CDs except for large box sets have been ripped - which is why I decided that the pretty sizeable additional cost of a Vivaldi transport could not be justified. I found too much difficulty in trying to rip SACDS given hacking the donor player, that many of the jailbreak files had been taken down from the internet and gave up).

Adding a Paganini Transport to a Puccini or buying both PaganiniTransport and DAC will add a little extra but compared to what is available from the current ranges it is going to be closer to more of the same. Personally I would save up for a more significant improvement. If you have ripped all of your important CDs and SACDs to hard drive then ask if you really still need a transport and instead go for a Bartok and a simple NAS with MinimServer to store the CD rips and to serve the Bartok. The Bartok is also a network streamer so you get rid of your computer. You also get to use the very good dCS Mosaic as the controller ( even less computer).

Hi not sure this will help, but its a different view.

Ive been through various spinners starting with Levinson 37…360s through 31 and 30 dac and leading to naim 555 All Second Hand…with 900 cd and no sacds I have bought, for not a lot a new Naim Uniticore to rip my cds and am buying HD ref recordings of Qoboz…

I dont know how I’m going to improve by adding further DCS kit (clock or upsampler)as its an expensive occupation, but not having to cost a new spinner into the mix has helped in the DAC choice.

I found too much difficulty in trying to rip SACDS given hacking the donor player, that many of the jailbreak files had been taken down from the internet and gave up).

I might be able to help you there Pete. I began ripping SACDs with a “hacked” Playstation about 8 years ago. What a PITA. But worth it. However, almost all of the Oppo disc players can do the same thing using Sonore’s readily available ISO2DSD software over a network. There are other players that work with it, too. And once you get it set up, about 5 minutes all in, it’s surprisingly easy to use. Somewhat ironically, I now use my MSB UMT transport (which has an Oppo mechanism inside) to rip SACDs so that I don’t have to play them in the UMT.

Thanks Greg but I just bought a Rossini Transport to play them!

I’ll PM you so the thread doesn’t move too far OT.

Vivaldi Dac + any drive you like + Network Bridge…after a while you shall notice that you don’t play CD any more…It wouldn’t have been the same 6 years ago…but today, most of the time, Qobuz or Tidal is equal or better than CD or SACD…I however still use my Linn Lp12…occasionally…

Thank you everyone, and especially Pete for his opinions about transports and Paganini vs current generation players. I have further questions about the other non-silver-disc options suggested (thanks Henners1957 and ChrisK), but I will message those because otherwise this topic will be completely changed. I’ll just add one note here about ripping SACDs: I’ve kept copies of the software and instructions so if Pete, or others, eventually want to try the “traditional” Play Station method then I may be able to assist.

Would there be a significant difference if a Paganini Clock took the place of the UClock?

Cable connections (BNC-BNC) are Stealth Varidig (to the SACD), and Stealth Octava (to the DAC).

The UClock can’t perform the USB to RCA conversion on my current MAC OS,

I am unsure what you mean. If you would kindly clarify then I will have a try at an answer if my knowledge stretches that far

On an earlier thread I described that after I changed from a 2011 IMAc to a 2016 Macmini, I got pops and clicks during playback. Turns out the V1 UClock I have is not comparable with my current MAC OS (Catalina). I had been using the DAC in my SACD player which was fed by the RCA output on the clock. The V1 UClock could not make the conversion from USB to RCA. A board for upgrade of the UClock was in its burn-in QC testing when the factory shut down. It is probably still there somewhere.

The dCS staff here in the US helped me find a DeBussy DAC to handle the digital to analogue conversion. This negated the need to have the UClock upgraded; its sole function now is to serve as master clock for both the DAC and SACD player, which it does very well.

Even though I probably could get the UClock upgraded, I don’t really need to; I’m thrilled with how the 3 components work with each other. If a substitution of a Paganini Clock for the UClock would make a noticeable improvement (and it sounds just awesome right now) I might consider that.

Hope that clarifies the situation. 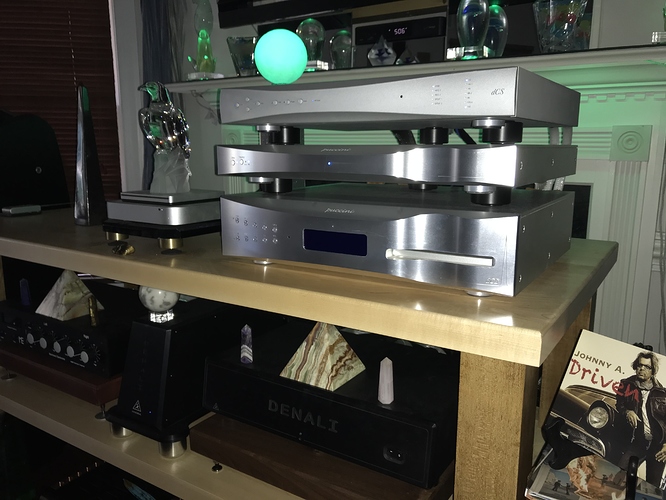 Thanks for your swift reply.

So it really boils down to what advantage the Paganini clock would have over the U Clock.

In your description of your system I don’t think that it would offer any advantages in terms of facilities. So it is down to sound.

AFAIK there is no major difference to the circuitry of the clocks used in the
2007-2018 series. However, as is typical with dCS products there may be differences relating to power supplies , transmitters/receivers etc. I don’t know.

So you may well find a small sonic upgrade with the Paganini clock but note that there are two versions one of which does not have a USB input or S/Pdif output ( the type that does is known as Clock 2).

However the limitation that you will have at the end of the day is the Debussy. It is a good DAC but no matter what you accessorise it with at the end of the day you will still hear a Debussy. A used Paganini DAC will always be far better even without an external clock. I think it would be more sensible to spend your money at the sharp end and try to find a Paganini DAC rather than clock. Do the clock later if you want. However, it’s your money

Sound advice–I’ll stay alert for a Paginini DAC. There is one for sale now, but it is in the UK, and I aint.

Plus it will be the wrong mains frequency and voltage.

have a great weekend.

Thanks for the advice, here is another question if ya have the time for an opinion.

After much thought (and self convincing), I upped my budget for a DAC upgrade from the DeBussy to the Bartok. That was last week. I upped the budget again this weekend to get into the Rosinni DAC range.

I already have a dCS UClock I can keep if i go for the Rosinni DAC, or conceivably, i could opt for a Bartok with a Rosinni clock.

I think i know the answer but which option would you recommend?

The clock is ( to some extent) just the clock.The DAC is where the action takes place.

That is a rather crude summation of the situation as the dCS master clocks also have their own hierarchy.

Unfortunately the U Clock is not entirely suitable for use with either the Bartok or Rossini. This is because generation 3 dCS products ideally require two separate clock feeds, one for 44.1 group files and one for 48.0 group files. That is not available from any dCS clock outside of the current production.

Given your cost constraints however the answer to your purchase plan is simple. Buy a Rossini and worry about the clock later. A Rossini without an external clock will sound better than a Bartok with one. It would be a great choice.

You may be able to use the U Clock but it will mean manually altering the clock frequency every time that the file changes resolution. In any case the newer clocks are better then the old ones. So a Rossini clock will be a bonus if and when you can afford it. Many of us are not able to purchase a full three or four box dCS stack in one hit.

Thanks–I just bought a Rossini DAC. I now have a Version 1 UClock to replace. Would a Paganini clock work with a Rossini DAC?

Answered my own question, nope. On to bigger and better things i guess.

Would a Paganini clock work with a Rossini DAC?

The answer is in my earlier posting.