Thanks, guys. I appreciate the help.

Since I mostly use Roon, I simply enabled this setting. It works like a charm. 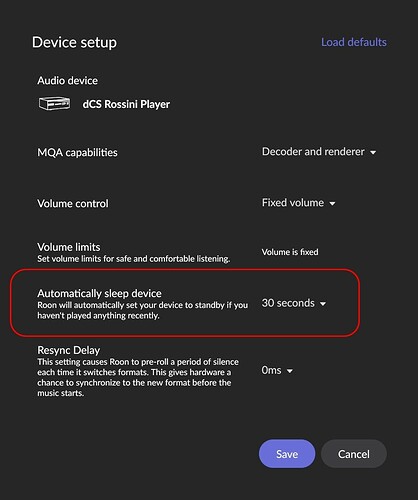 Oh and a friend sold me this cable cheap. 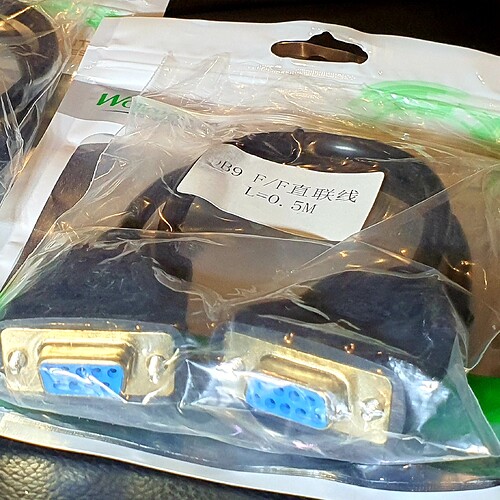 I used it to hook up my Rossini Player to the Clock. Now they both wake up and go to sleep together.

So now when Roon puts my Rossini Player into standby, the Clock follows. If I play something in Roon, both exit standby mode at the same time.

I don’t, I prefer knowing everything is on and ready.

Therefore, it should be an option that can be turned on or off. I do not think about fully switching off the device, but about switching to standby mode when some elements are live and ready to go straight to work.

Well it kind of is, you can make the decision to connect the clock and DAC together and whether to use the sleep option.

Unfortunately, I do not have a clock in my system. As I understand the DCS Rossini clock has an autosleep option?

Unfortunately not , the autosleep facility appears to be via Roon. Leonard is referring in his post to the fact that coupling the Rossini DAC and Clock using an RS232 cable means that they can be put to sleep or woken up by selecting the command on only one of the devices . This is DAC or Player or by the IR remote. The option is called Power Link. In the same fashion when exiting standby mode is selected via Roon both devices will return to play status at the same time.

The life of electronics is mostly related to life of electrolityc capacitors. They are dying mostly of heat and overvoltage and at rated voltage have live between 1000 and 5000 hours. In Bartok you have below 40 celsius typicaly, so they will last around 100k hours. Count how many of them you have yearly. You have over a hundret of them in one device. My advice, switch device off for night. Keep it on when listening breaks are not longer than a few hours.

Not sure what kind of clocks dCS use, but modern OCXO [Oven Controlled Crystal (Xtal) Oscillator] clocks are physically encased in a very carefully controlled thermally insulated ‘oven’. Their oscillation’s are stable at an ‘ideal’ temperature, and any powering down will rapidly move you away from this optimal temp and clock speed.

Typically they take 30-50 days to reach this optimum. I understand that a small glitch in power (1 second or so) will not meaningfully affect SQ.

Anything from 1 minute up will take a proportional heat up time (I don’t know the exact relationship) to revert to optimum.

So the recommendation is to never switch off. The signal recipient may be switched on or off as per manufacturers suggestions, but ocxo clocks are best left on all the time.

Not sure what kind of clocks dCS use

[FAQ] What is the difference in accuracy between a Rubidium atomic clock and a dCS Master Clock? dCS FAQs

Rubidium Clocks are typically accurate to 0.1 parts per billion in the medium term (about 1000 times more accurate than a dCS Master Clock) but they generate some short-term jitter due to the way they operate. Our opinion is that stability (i.e. low jitter) is much more important than extreme accuracy, so we have steered our Master Clock development in that direction.

[FAQ] How do I add an atomic clock to my dCS system? dCS FAQs

You can improve the accuracy of the timing in your system by slaving dCS Master Clocks (Vivaldi, Scarlatti, Paganini Plus) to the 10MHz output from a Rubidium reference generator. To do this, connect the 10MHz output to the Master Clock’s Reference Input and set the Coupling menu page to AC. The Master Clock will take a few seconds to lock and then will display the “locked” icon. Listening tests have shown that a dCS Master Clock is very effective at reducing atomic clock jitter and the combin…

[FAQ] What is the timing source used in dCS Master Clocks? dCS FAQs

We use a microcontroller-enhanced crystal oscillator. The Master Clock is locked to a Rubidium source and temperature-cycled very slowly overnight while a computer logs the corrections that are applied to keep the unit locked against temperature. An accurate correction formula is extracted from the data and programmed into the unit. The Master Clock is temperature cycled again to check that the calibration is correct. This gives a frequency accuracy that is typically within +/-0.1ppm and changes…

And we know that the external clocks are beneficial, but not really why

We do know why, but it can be lengthy to explain. I’ll try and keep it as short as possible…

Locking a DAC to a Master Clock which does not have to contend with all of the sources of phase noise the DAC does (CD mech vibrations if present, power supplies running different circuitry causing changes in the power rails fed to the clock, the EM leakage from said circuits and additional processing for other functions like D/A conversion, heat generated by the product changing the frequency of the oscillator) means the DAC then has a much more stable reference to adjust its own clock to.

Why is this preferable to simply locking to the sync pulses in, for example, the SPDIF or AES signal coming from a CD transport to the DAC? Well, aside from the fact that the CD transport’s clock(s) have to deal with very similar sources of phase noise to the DAC which would put jitter into the signal, an effect called intersymbol interference comes into play.

When a digital signal is passed through a cable, the cable will act as a filter to a degree. A poorly designed cable, which is unfit for use with the interface it is designed for – like AES3 – could potentially filter out high frequencies from the signal before it reaches the DAC from the source device. This causes an interaction between any two consecutive data bits within the signal, called intersymbol interference. Depending on the relationship between one bit and the following bit, the transition between the two can be temporally smeared – the clean vertical line of the digital square wave becomes a sloped line, meaning the exact moment a 0 changes to a 1 or vice versa can be blurred. In short, jitter can be introduced purely from the interactions within the data itself.

If the timing data from the audio signal is being used to lock the DAC’s clock to, this intersymbol interference will have a negative impact on sound quality, as it can introduce jitter to the DAC’s clock. However, if the audio system is making use of a Master Clock, and the timing information embedded in the aforementioned AES3 signal is no longer being used, the effects of intersymbol interference are negated.

While the same sort of filtering can of course occur on a clock cable, as the signal is perfectly regular the filtering causes no timing change from one bit to another – no jitter from intersymbol interference.

Now, all of this is subject to how the PLL in the DAC is designed (the PLL is the circuit which locks the DAC’s clock to the same rate as an incoming signal) – should this actually have an impact in a well-designed DAC? Well, as with any engineering there is no such thing as a free lunch. If you design your product to reject interface jitter which is coming from outside the DAC (let’s say a jittery signal from a CD transport), you better make sure your DAC’s clock oscillators are very good, because your system will be more susceptible to intrinsic jitter (such as phase noise) as a result. If you are using a low phase noise oscillator such as a VCXO, this is doable – this is the approach we take. If you are using a VCO or to a lesser extent an OCXO based clock, you may have to bias the system’s PLL somewhat more towards accepting interface jitter to reject some of the intrinsic jitter from the oscillator. This may be necessary to get the best from that product. It’s a trade-off, and how the product designers work out which route to take depends on a huge number of things, not least product price point and use case.

So the recommendation is to never switch off.

So, dCS Clocks can be switched off without a problem with accuracy.

Thanks Ermos… appreciated. Am going to need time to absorb this! Definitely not a techie.

Just to clarify - I was referring to an OCXO.