Internet Radio...Roon Nucleus vs Bartók. Is the Signal Quality the same?

I am having issues with Roon Internet Radio. The Roon Core is on my Roon Nucleus. My music stored on the Nucleus’s SSD is working normally.

While I’m here, is anyone else having issues with Roon Internet Radio?

Don’t know if it’s my imagination, but the Bartók’s Internet Radio signal quality, appears to be better.

Could the Bartok and Roon be using different internet streams, one of which sounds preferable? That could certainly be the case. For example all of the internet streams of BBC national stations come in various permutations of flavour selected from , MP3 (e.g.R4), AAC ( e.g.R3) and HLS ( R1-R4 inc). The HLS streams are of higher resolution and therefore sound better. However Mosaic is not able to process HLS. Roon may do so ( I do not know). So one thing to do is to check ( if you can) whether the URL of the radio station used by each player is the same. Not being a Roon user I have no direct knowledge but I think that Roon displays brief technical information about the source resolution just as Mosaic does in full screen view. Another way of checking.

With other stations similar discrepancies may exist , for example some stations via Mosaic use lossy codecs. However they are also available as FLAC streams. Again Mosaic will not process FLAC radio but will handle the lossy codecs. Roon may (?) process those FLAC streams for all I know.

AFAIK the radio aggregator for Mosaic (airable) does have both HLS and FLAC stations in its catalogue ( the view in Mosaic is not of all the stations available from airable , only those compatible). So we can’t blame them. I have been banging on about this for some time.

I managed to get Roon Internet Radio working again, via Samsung phone, Roon app. It shows MP3128 kbps. Whereas, the Bartók Internet Radio streamed at 44/24 bit

Then…Bartók played in this format, a few minutes later? I don’t get it.

That is odd. and I do not have an explanation. Can you get it to do it again or was it one of those weird things that sometimes happens? I checked and my Vivaldi/Mosaic shows Time-warp Internet Radio Ireland consistently as MP3: 128.0 kbps.

I’m getting more confused by the hour! (If that’s possible)

Yes, the radio station played directly from the Bartók is MP3 128 kbps. (see screenshot below) 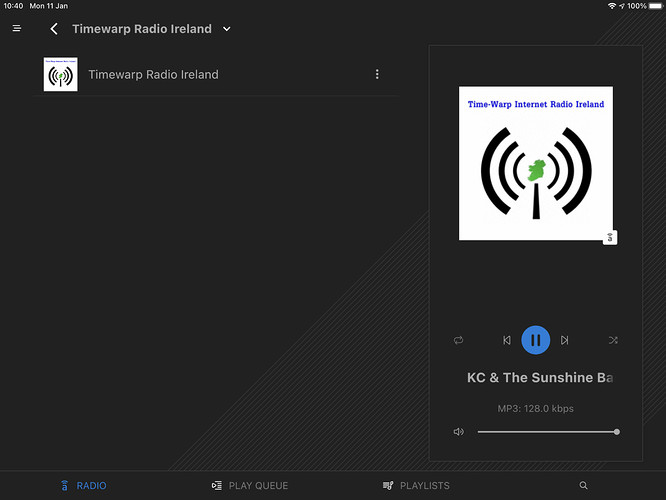 The same station played via Roon, appears to give two different formats? 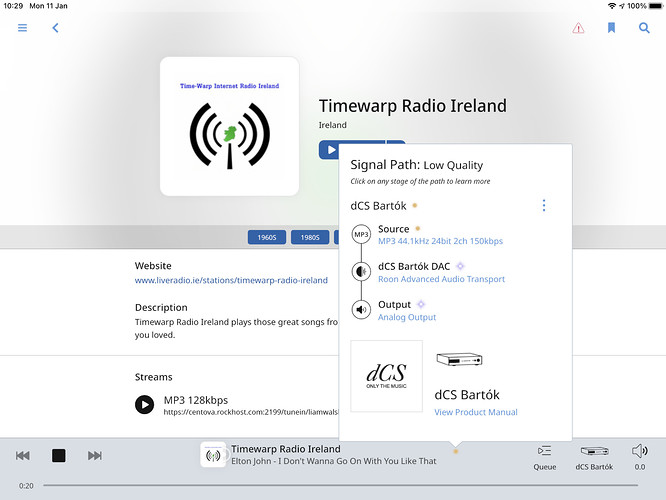 Both Roon and Bartók screenshots were grabbed using their respective iPad apps.

This screenshot was taken from the Roon app on my iMac. Again, a different stream? 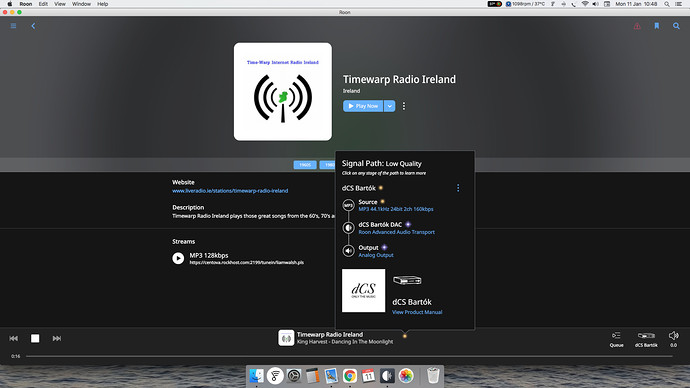 You will see a 24/44.1 stream notification on your DAC as that is the resolution of the stream ( not the data that it carries). It is actually 16/44.1 but it has been padded as standard by Bartok to 24 bit - in Vivaldi there is a “Clone” mode to defeat the padding should you wish. I do not know if this is available with Bartok , check the “Device” settings in Mosaic or look for it on the front panel menu.

So if you look at the data input displayed on the DAC this should show as 24/44.1 because that is what it is receiving. It doesn’t know it has been data reduced by the MP3 codec as the processing has already been carried out by Mosaic before being fed to the DAC or in your case the DAC section of Bartok. If you try , say, BBC Radio 4 then Mosaic should show it as MP3:128 kbps but the DAC display will show the data as 16/48 ( native format with Clone selected or 24/48 otherwise).

So, going back to your first post, I can only speculate that for some reason Mosaic had either not engaged the MP3 decoding or not reported it for a short period. Odd.

BTW the data shown by Roon in your screenshots is incorrect regarding the resolution of the MP3 stream showing it as 150kbs in one view and 160kbs in another .It is 128kbs which Mosaic correctly shows and which can be verified by a Google search on the station.

BTW the data shown by Roon in your screenshots is incorrect regarding the resolution of the MP3 stream showing it as 150kbs in one view and 160kbs in another .It is 128kbs which Mosaic correctly shows and which can be verified by a Google search on the station.

Roon is correct. You are mixing resolution, or sample rate, and streaming rate.

Streaming technology is used to distribute Internet radio, typically using a lossy audio codec. Streaming audio formats include MP3, Ogg Vorbis, Ogg Opus, Windows Media Audio, RealAudio, AAC and HE-AAC (or aacPlus). Audio data is continuously transmitted serially (streamed) over the local network or internet in TCP or UDP packets, then reassembled at the receiver and played a second or two later. The delay is called lag, and is introduced at several stages of digital audio broadcasting.

In this case, the MP3 stream has a resolution of 128 kbps, as shown in the screen shot at the left, but the stream comes in at 160 kbps, giving time to the device to order the packets in time, to prevent lag.

For anyone interested, this has to do with variable bitrate VBR used for, in this case, VBR-encoded MP3 streaming.

Variable bitrate (VBR) is a term used in telecommunications and computing that relates to the bitrate used in sound or video encoding. As opposed to constant bitrate (CBR), VBR files vary the amount of output data per time segment. VBR allows a higher bitrate (and therefore more storage space) to be allocated to the more complex segments of media files while less space is allocated to less complex segments. The average of these rates can be calculated to produce an average bitrate for the file...