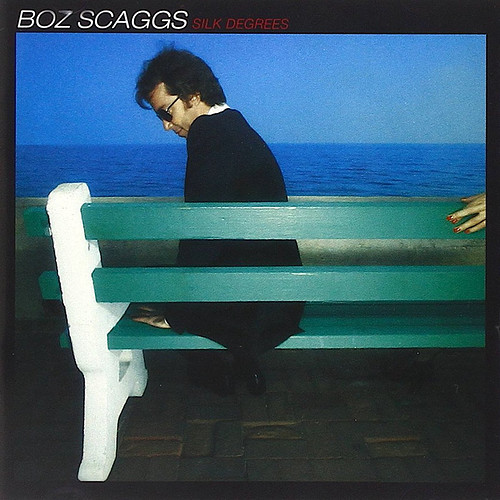 The 1970s was a great decade for rock music, on both sides of the Atlantic. In the first half, the USA and UK seemed to be in sync with one another stylistically but by 1976, they were diverging fast. Britain was witnessing the beginnings of the punk explosion, while America was drifting ever further into the ‘LA sound’. This was sophisticated, beautifully crafted, adult-oriented rock personified by Steely Dan, The Eagles and Fleetwood Mac. Of course the latter was originally a British band, but Rumours came to personify those slick, laid back productions that dominated FM radio play across America at the time.

Yet at one point in late 1976, it looked like Boz Scaggs’ Silk Degrees could become the greater commercial success. Recorded in September and October of the previous year in Hollywood, California, it radiated blue skies, sandy beaches, shot bars and cocktails – and the louche lives of those who lived it. Released on February 18th, 1976, Silk Degrees ended up spending an epic 115 weeks in the Billboard 200 album charts, and was certified five times platinum by the RIAA. The amazing patience of Columbia Records paid off, as Scaggs’s seventh album of blues-tinged soft rock – so-called blue-eyed soul – finally caught America’s imagination.

Scaggs once explained that the name Silk Degrees didn’t mean anything in particular – and arguably nor did its collection of songs. Rather than trying to make any sort of dramatic statement, lyrically he chose to document the goings on of people around him. There’s some sardonic humour, a certain world-weariness but also tenderness too. Yet this album’s real strength is arguably its music, made possible by Scaggs’s decision to collaborate with some of the finest up-and-coming US talent – namely David Paich, Jeff Porcaro and David Hungate of soon-to-be Toto fame, plus Fred Tackett who went on to join Little Feat.

Silk Degrees was both Scaggs’s commercial and creative zenith. He’d left the Steve Miller Band some years earlier needing to prove himself, and with this album he finally did. Collaborating closely with Paich on songwriting duties, he delivered a jazz influenced soft rock classic that oozes sophistication thanks to Joe Wissert’s state-of-the-art mid 70s production – one that sounds great even today. It’s a quintessential seventies analogue sound, slightly soft around the edges but very clean and with a warm sepia tint. Tracks like Lido Shuffle, Lowdown, Georgia and Harbor Lights – plus We’re All Alone, which became a hit for Rita Coolidge – make it an album you can play from beginning to end. And if the catchy tunes don’t get you, the great musicianship will.

There have been hundreds of releases of this classic album, on formats as diverse as 8-track cartridge, Compact Cassette, MiniDisc and Blu-ray Audio. The 2007 remastered CD [Columbia, Legacy 82876 86715-2] is as good a place to start as any, but the long-deleted Mobile Fidelity Sound Lab version [MFSL UDCD 535] is the collector’s choice. Even the former sounds pretty spectacular on a high resolution dCS digital source, but the latter is more special still.

Indeed a classic. I wore out an LP of this in the 70s. And I have my MFSL disc ripped, and some of its ones and zeroes are starting to show some smooth edges.

But maybe should we call it the February 2021 album, seeing as it’s, well, February.

Well spotted Greg! Your comments on the Album of the Month from Jan 2019 brought to my attention that we seemed to have stopped sharing our curated music content with the community - something which I think should definitely be picked up again.

This was our pick for last month, so backtracking somewhat but we’ll be getting up to speed with our Album of the Month and Classical Choices for January and February posted here.

Greg beat me to it with a comment: I have both physical CDs that are referred to, and can vouch for the Mobile Fidelity disc as the better of the two. Heard after the Columbia reissue, the MFSL disc sounds dulled at first, but it soon becomes obvious it is more natural sounding, and I think has more depth. Listen to the Columbia version after the MFSL and the Columbia version sounds bright, and a little thin. That was my impression.

And Simon, I remember having similar experiences with some of my first MFSL discs. They seemed a bit flat at first. That wore off.

This was our pick for last month, so backtracking somewhat but we’ll be getting up to speed with our Album of the Month and Classical Choices for January and February posted here.

James, that’s great to hear! I really enjoy reading about and listening to the dCS team selections.

I pulled my two CD versions off the shelf: neither have release dates (of the reissue, not the original album). The Columbia disc is the “Mastersound” edition, gold disc, SBM, using original mastering engineer Doug Sax. The liner notes claim that previous issues were reviewed, even back to the LP release. But the MFSL disc still sounds better to these ears. Shame there is no SACD.

Shame there is no SACD.

You said it. I shouldn’t have cast perhaps such aspersion. Doug Sax is a good engineer.