Before we get into if clock cables matter, I have tried the geistnote / apogee cables and while they are great, some pricier ones unfortunately do sound better to my ears. I don’t want to argue about that. Assuming there is a difference in cables, where should clock cables (and clocks for that matter) matter more? Recently I was able to get the vivaldi clock to add to my dac and upsampler. I have four geistnotes and two “nicer” cables that I replaced 2/4 of the geistnotes with on the 44.1 side, leaving the 48 frequency with geistnotes for now. Before shuffling the cables around I started to question where should cables with less jitter be put first? Does the dac or upsampler really need clocking more? Does 192 or 44.1 need clocking more? For the second question I’m thinking 44.1 needs clocking more. Fewer samplings / second means less accuracy is more perceptible here. And if that’s the case would the upsampler be the component more sensitive to jitter? I’m using the DXD x2 option to 352/384. Apologies if this is an insanely stupid question.

For a given frequency you should definitely use the exact same cables to each unit, so I wouldn’t try using both better cables for both frequencies on either the DAC or upsampler. Only one base frequency is used at a time across the whole stack, so using the better cables on 44.1 is probaly the best choice if you’re momstly listening to CD quality tracks. High rez tracks more frequently use a 48 Hz base frequency (96/192).

What Jeff said. I haven’t done an actual experimental comparison, but I cannot imagine any good coming from splitting your better cables across different frequencies.

If better cables reduces noise/jitter, I’m just curious where that jitter reduction is better appreciated. Of course I would like a full matching loom but let’s just remove that from the discussion. I’m trying to see if I’m thinking about this right. The upsampler receives 44.1 clock signal and Ethernet 44.1. Outputs 352.8k by DXDx2. Dac receives 44.1 clock signal and 352.8k signal.

Before calculus to see the area under the curve you made a bunch of rectangles(and later trapezoids) to approximate the area. The more rectangles, the more accurate. Maybe a good analogy for 44.1 vs 88.2 etc. So in my mind without fully knowing what’s going on, error in the 1/44.1 sized chunks would cause more noticeable results than smaller 1/352.8 chunks. I’m probably in the weeds, but hopefully I make some sense.

I have the Vivaldi clock and it is VERY responsive to different cables. As 4 cables rum in and out it is a bit difficult to asses WHICH cable is doing what. Trial and error is the only way really as far as I can see. Also the power cable is just as significant. A fine delicate power cable is essential, anything more tends to deaden the sound. I like the Crystal power cables and these were best on the clock. Strangely however price effect was in reverse. A cheaper (relatively!) version is performing with a better touch than the Crystal flagship one. Odd, but is shows very much it is a horses for courses all round on this matter

I’m not going to debate whether or not digital cables have a sound, but if they do , they definitely do not introduce jitter

Actually I would think that is the most likely way in which clock cables can affect sound - very slight smearing of the timing signals between the word clock and the DAC resulting in slight clock jitter.

I recently upgraded from the Apogee WydeEye to the Shunyata Omega clock cables and it was a nice step up in sound. More than expected. More open and clear and the bass seems fuller. It is interesting how everything matters.

@Lee that’s almost exactly the situation I’m in. I had one Shunyata alpha cable connecting the dac and upsampler before the clock, got four apogees for the clock, then found a used omega and ordered a second alpha which arrived last night. I was trying to keep the brands out of it and more thinking where clock error would be most noticeable. Most likely I’ll end up with one frequency being alpha and one frequency being omega, but first want to try a few combinations. May I ask what cables you run through the rest of your system? Sigma interconnects arrived last night as well, and I have power cables, an Everest, and 2xAES sigmas for the dac to upsampler.

I use a variety of cables but other cables include Sigma v2 and Synergistic Research Galileo.

Well…. All those rectangles are just the way the area under the curve is defined . Admittedly, that is not how they teach it at school. It would be too much fun.

Actually I would think that is the most likely way in which clock cables can affect sound - very slight smearing of the timing signals between the word clock and the DAC resulting in slight clock jitter.

Then you need to look into what jitter is

Actually, when an external clock/cable is used, it’s only as a reference signal used to fine-tune the internal clock of the DAC (which is then used for D-to-A conversion) via a PLL stage on the Control Board FPGA.

That PLL stage in fact acts as a low-pass-filter that eliminates jitter from the incoming external clock signal/cable before it’s used as a reference for the DAC’s internal clock.

So, any minute amounts of jitter caused by the cable, has no real consequence in the overall scheme of things.

Part 4 – Clock Synchronisation There is a problem posed when multiple digital audio devices, each with their own internal clocks, need to work together. Take the example of feeding a CD transport into a DAC. The DAC has a buffer – a section of temporary memory which stores the audio samples it receives from the CD transport. The transport’s clock dictates when a sample is sent out to the DAC, and the DAC’s clock dictates when the sample is used and converted to an analogue voltage. In an ideal…

Also, the following two videos from Silicon Labs describes clock jitter and PLLs quite well (@2:40 in Part 2 explains jitter elimination with the PLL); Then it’s something else, but the differences are not subtle.

In high end audio, there is always “something else.” And the hyperbole we apply to it is indeed “not subtle.” It would be as scientific, and as meaningful to each other, to ask “how does my wallet feel?” I am sitting here at this moment looking at beautiful dCS equipment [how much of our pleasure is also driven by visual cues?] connected with expensive cabling to each other and to a very expensive GNSS reference clock, aware that it is locked on to 120 different satellite signals. I have absolutely no way to test my own confirmation/expectation biases with respect to the performance of my system. I rely on the—incredibly crude by comparison to the electronics—transducers of the speakers or headphones to convey the music that gives me joy. Given the comparatively low and slow resolution of transducers, I am entertained by our obsessiveness with factors that are vanishingly tiny. I am not saying they are imperceptible or [perish the thought!] not even real, but the ROI for addressing some of them might be higher if the dollars were spent elsewhere. Still, that’s the beauty: we each get to choose how to do that. We are prisoners of our brains.

Jay Luong in Audio Bacon has a review of many digital cables on the market. 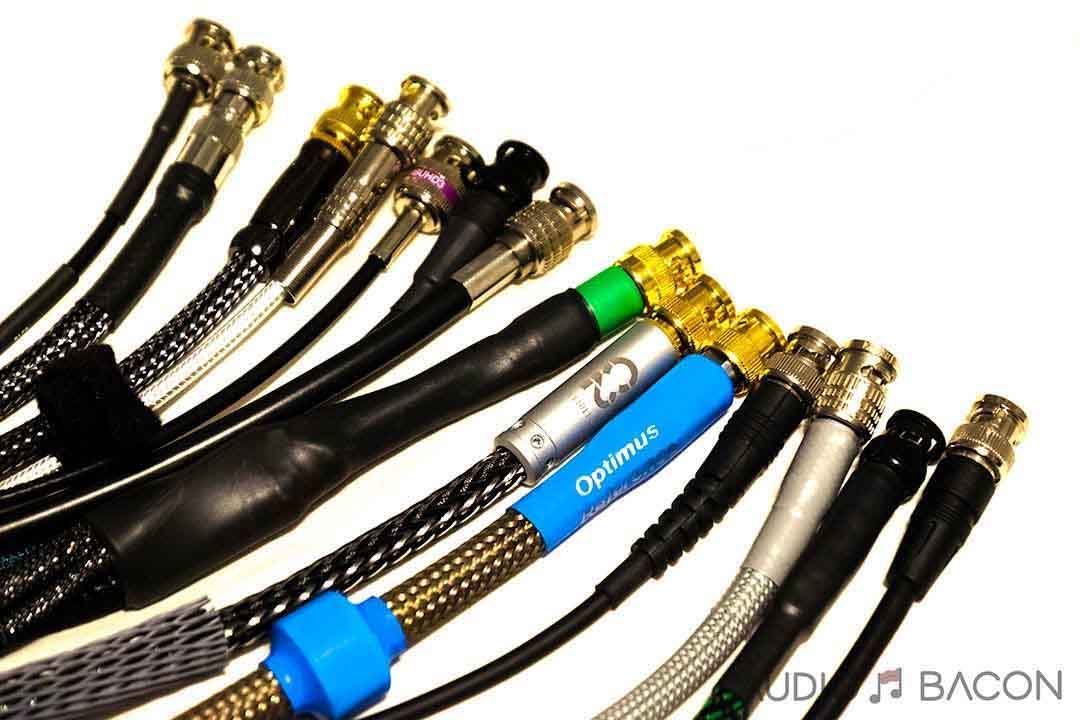 With the release of the Chord Electronics Blu Mk.2 and recently announced Chord Electronics Hugo M Scaler, I’ve gotten many inquiries about the best digital BNC cables to use. These digital products still sound great with stock cables but, as...

I have listened to a few digital cables with the Rossini clock and I hear clear differences in my system as a result. Audio Art AAC Statement Digital, Tellurium Q Silver Diamond Waveform and currently running VH Audio Pulsar Ag Digital cables ($300) sound excellent in my system.
Regarding power cords I had the same experience as Bruno with my Rossini clock in that the Shunyata Alpha V2 sounded much better than the Sigma which was too much cord and compromised the clock.