Is dCS working on Apple Lossless native integration in Mosaic? Especially for Network Bridge, there is no other way to access this streaming service.

Why would you want to stream to your dac when you have an iPhone, iPad, or Apple TV? Is my understanding of Apple’s position on allowing 3rd party integration.

Network Bridge provides access to Apple Airplay. So you should be able to stream Apple Lossless from an ipad or iphone to NB. Airplay is limited and does not provide hi-res so there is no technical mismatch as far as resolution is concerned.

NB: Network Bridge is now a legacy product so no further specific development is likely to take place in relation to this product.

Thank you for your reply, Pete.

I was not aware that Apple Airplay can stream Lossless (though I don’t think I have any way to check if what Network Bridge receives is indeed Lossless, apart from it being 16/44.1).

It is regrettable that Network Bridge is now a legacy product, when I purchased it new by paying full price (and what a price!) only 2 years ago, in September 2019.

dCS has a reputation for standing behind their products (which is only to be expected at this price level), including with software/firmware updates. Is that perhaps no longer true, or does it not include the Network Bridge?

I don’t think I have any way to check if what Network Bridge receives is indeed Lossless, apart from it being 16/44.1).

I
Using portrait view in Mosaic open the full screen display ( just tap the the thumbnail of the album artwork in the play bar at the bottom). Mosaic will display the incoming data type/rate.

When a product reaches the end of its life further developments are no longer continued. This has always been the case right from Elgar ( their first consumer DAC in 1998). Support is however maintained for any problems encountered but there will be no new features added . In fact of you read down the list of recent latest topics here you will see a dCS engineer picking up on a member’s problems with his old Puccini.

Nevertheless if there is an update that is universally applicable to the current range of products and it happens that the legacy product runs on the same platform then it could well be that the update will work if you can access it via the Mosaic update feature. So the next Mosaic update may possibly be available to you but it is likely that there will not be any Network Bridge firmware updates in the future.

Incidentally Network Bridge was itself a product that was itself designed for use with legacy dCS products. It was specifically designed to add connectivity and the ability to allow the playing of new hi-res formats ( though not in their native form but downsampled) via old dCS DACs that could not in themselves be updated. It was never originally intended as a universally applicable product though many enthusiasts in the wider world found that it could be used with their non-dCS systems.

As for price, that was the main reason it was withdrawn. dCS could no longer afford to make it and sell it at that price due to raw material and component inflation and reduced availability. Presumably, the price would have escalated to a point where it would not have enjoyed sufficient market support. I can tell you that the price immediately before its withdrawal was significantly higher than what you paid two years ago. In fact I suspect that in due course it may well have reached a level where for many buying a Bartok would appear to offer better value.

Using portrait view in Mosaic open the full screen display ( just tap the the thumbnail of the album artwork in the play bar at the bottom). Mosaic will display the incoming data type/rate.

I see that Mosaic displays resolution only, rather than whether it’s Lossless or not.

Apple Music itself displays if the track is Lossless (and if you press Lossless it further specifies the resolution). But there is no way that I know of to verify Lossless vs. lossy on the receiving end of the Airplay transmission.

I see that Mosaic displays resolution only, rather than whether it’s Lossless or not.

Perhaps not in all circumstances, Pete: only if Mosaic has access to the media file (local playback) or the media server provides this information. But with Apple Music I suspect the media stream that rolls out of the Apple Music API is already unpacked to 44.1/16 (or whatever setting is active in the Apple MIDI app) and the provenance of the media is now hidden.

Mosaic displays the data rate actually sensed by the device and not in accordance with metadata supplied by the source. This sometimes leads to unexpected differences. For example BBC Radio 3 is “officially” AAC 320kbps. Mosaic shows its true rate as AAC 317.4. Mosaic can show this as it is the app decoding the lossy incoming stream. The DAC, on the other hand, will show this as 16/48. It is a 16/48 stream but , as AAC processed, with missing data.

That is no doubt analogous to why a dCS DAC displays an input from the Apple Music ( the lossy version) player as 16/44.1 because, as you point out , the Apple player app has already unpacked it. But we are talking here about Mosaic which cannot play Apple Music anyway and therefore has no display at all for it.

The dCS component ( e.g. DAC, Network Bridge) will accept Apple Airplay but the data has to be provided ( played) by an Apple device e.g. i-pad as I pointed out the week before last. Mosaic app has no way to play Airplay and therefore cannot display it. Go to the Mosaic services screen and you will see it is limited to UPnP, USB, Deezer, Qobuz, Tidal, Radio via airable and Spotify.

According to a post by Naim staff 25 days ago, ‘iOS15 is currently clamped to AAC still for AIrplay2’.

If this will work like Spotify, it would be a great solution.

According to a post by Naim staff 25 days ago, ‘iOS15 is currently clamped to AAC still for AIrplay2’.

I’m pretty sure they meant Apple Music via Airplay2 is AAC only at this time.

Airplay/Airplay2 can transport Redbook, i.e. 44.1k/16bit via apps like Qobuz over Airplay on iOS/MacOS directly to the dCS DACs/Upsampler. Like so; 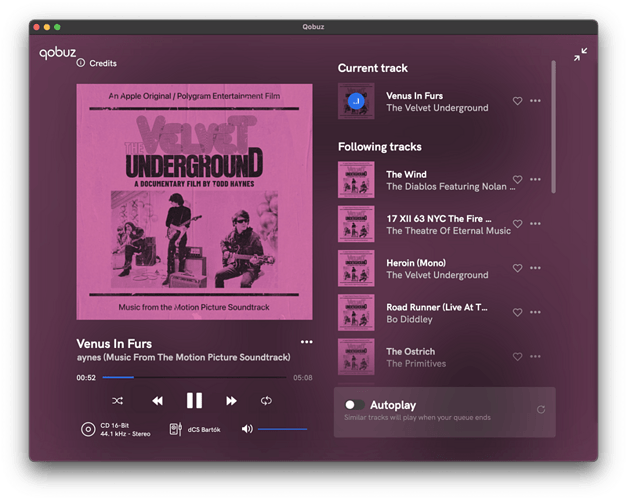