I actually carry around the house with me

Great to hear that you are enjoying your Bartok.

There is, however, no sensible answer to your question. Rossini is a mature product and the addition of a major hardware change is most unlikely. By the time the replacement for Rossini comes along in some years time your Abyss AB-1266 TC or Susvara or SR1a may well be considered old hat and will likely either have been replaced in the hierarchy of cans by their own successors or by newcomers from as yet unheard of manufacturers.

You cannot predict what will happen. dCS may well not add a headphone amp to any future products. They may equally add one to all future products. Nobody knows (probably not even dCS right now). If you want to improve upon what you have now then you can only resort to what is available now.

Hey, if you are loving what you have right now and it is new then why on earth are you thinking about replacing it already? Especially with things that don’t yet exist.

I actually carry around the house with me

And with a very long mains lead?

This is a very good point. Bartok may not be as successful as they wanted (I doubt but I don’t see sales data), or better received than the expected, warranting more all in ones (Vivaldi one one).

It may help if I give you a little idea about how dCS normally works.

They are a small company with a world wide following. Their products are normally made to order so they do not carry an inventory of finished items. So think of certain super car manufacturers - it’s kind of like that. So a lead time from receipt of order of up to 3 months is not unusual.

One result is that there must be limits to production capacity with a corollary that refreshing the whole or large parts of their range of products is not done simultaneously. Hence products are designed for a long production life and refreshing the range happens over a cycle of time. Due to the way dCS designs products upgrades to products in the field can take place. Hence the extended period of production of a given model may not result in it becoming outdated.

So far their mode of introducing new models is to create a flagship model then over the coming years to replace or introduce models lower in the hierarchy of products one by one.These will incorporate as much of the technology of the flagship as is possible at their price point. The whole cycle may roll over several years which makes prediction of future products difficult, not only to when it will be but also to what it will be as over this extended time both technology and demand will alter.

We are approximately now at a point where some are guessing that a replacement for the current flagship , Vivaldi, is likely. Exactly when this may be is, however, uncertain. It isn’t like my TV set where I know that every year the manufacturer will announce the new year’s models in April and they will hit the shops in June.

So expect a replacement for Vivaldi first as not only is it the flagship but it has now been in production the longest. Then presumably a replacement for Rossini a year or two later, subsequently Bartok some years after that . Of course there is also the wild card of some new and completely unanticipated model.

My advice therefore is not to try to plan for the future too precisely. You could, of course, simply put money away against the fact that something new will come along eventually. You can plan short term with clearer facts but only with regard to existing products.

I would think that Bartok has been very successful judging from the amount of traffic relating to it that has been generated here since its introduction. I would expect it to remain in production for a number of coming years . That is only a guess informed by dCS’ past behaviour.

Was Bartok a surprise to you all? Were you instead expecting a refresh to Vivaldi?

Not a surprise as at the time we were anticipating a replacement for the old entry level DAC, Debussy, which by then had been in production for the longest time ( approx. 2011-2019) and therefore was in its due position in the cycle of product refreshment . Bartok is effectively that replacement , albeit with the addition of network streaming . The addition of the headphone option was novel however and therefore that feature was indeed a surprise.

Bartok clock? Debussy did not have a separate clock so on that basis I would not anticipate one for Bartok . There was a separate clock for a product line called Puccini which sat above Debussy but below Paganini ( closest equivalent now is Rossini which has some conceptual elements of both Puccini and Paganini - all in one box for the former and next to the flagship for the latter). That was called the U Clock and some Debussy users added it . However as Puccini no longer has an equivalent the nearest for a system clock now is Rossini Clock. Could dCS make a significantly cheaper version?

Or instead a separate headphone amplifier?

Quite a few have asked for that. However is a purely analogue product ( dCS headphone amp + DAC already exists of course) somehow outside of dCS’ business ethos ( it is after all Data Conversion Systems) ?

Please don’t take the following in an adversarial tone, Flying.

If you are sincere about having a medically-diagnosed disorder affecting your life, what in the world are you doing on forums, be it these or others, audio or not, where there will always be a better “something” than what you already have? I would think such triggering places would be the last you’d want to be exposed to.

Paradoxically, focusing on what you might miss out on will make you miss out on the only matter that’s finite, and, ultimately, important: your time.

I understand, and certainly no need to justify yourself. And once again, please don’t take any of that which I wrote as disrespectful.

My recommendation is XI Audio’s formula S or Benchmark’s HPA4 based on my trials.
This week I’m going to place an order for a black “formula S”.
Unfortunately XI Audio no longer offers silver one.
I’m now using Final’s D8000Pro with Bartok+. 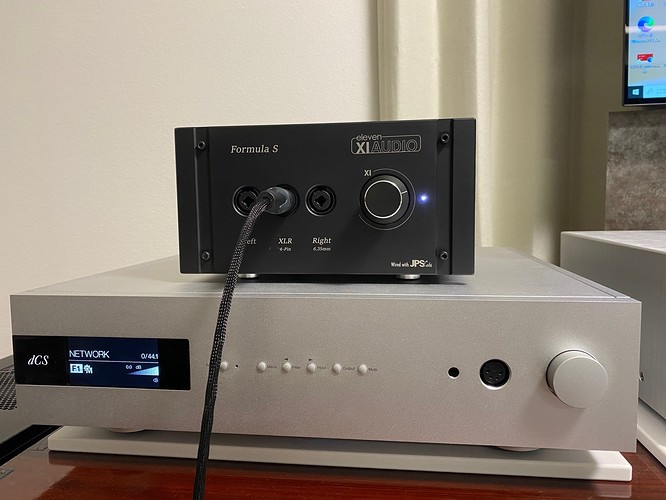 My trial environment was…

Normally D8000pro is directly connected to Bartok+'s XLR balanced phone out.
It is good enough. But formula S provided me more “dead quiet background” and “expanded sound stage” without any losses in transparency with D8000Pro.
It was the same with D8000Std.
I think HPA4 is improving speaker sound as it is set in between Bartok+ and Pre-AMP.
It is my impressions only. I think others can tell different stories. 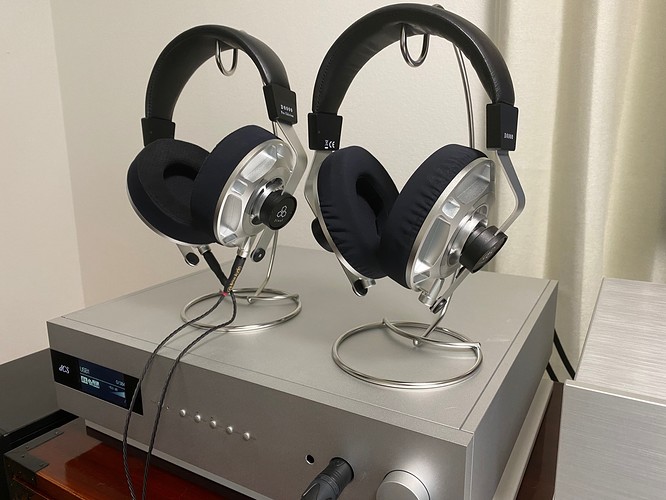