Hi, Headphone only guy at the moment

I currently have a Bartok with the headphone amp. I use it to power Abyss 1266 headphones. I found some cans IE Susvara very poorly served by the Bartok amp power wise. This got me thinking wether to continue to invest in improving my current Bartok platform with maybe a rossini clock etc

Or should I look into selling off/trading the Bartok (its only two mths old) for the new LIAN line as I see from the published info the power amp in the LIAN appears to be superior but maybe not the DAC portion. Any thoughts out there?

I don’t think dCS ever stated which is the better sounding DAC.

I would be surprised if Lina sounded better than the Bartok.

I’m surprised no one has done an A/B. Maybe not on this forum since it may not support the DCS marketing strategy, but I haven’t found anything elsewhere on the web. If it’s the same technology folded up in to a smaller format, and the only difference is power supply, etc., it may be pretty close, or even better. I’ve been debating whether to buy a used Bartok or a new Lina–and I’m still debating.

I’m surprised no one has done an A/B. Maybe not on this forum since it may not support the DCS marketing strategy

Although the Ring DAC design is the core dCS technology at the heart of all of our DACs the Bartok and the Lina are aimed at different uses and as such have different places where they excel.

If you’re looking for a small HeadFi system and you pit the Lina DAC and HPA against a Bartok with headphone amp then the Lina setup will better the Bartok (increasingly so as you give it ever more difficult headphones to drive) as well as being more flexible in its placement.

If you are looking for a standalone DAC to slip into an existing HiFi setup then the Bartok will give you a better result than a Lina DAC.

If you are looking for something to use directly into power amps or powered speakers then the Bartok is your answer.

I actually typed this in a Google search on the web and, suspect that others have the same question as the original poster or, it will come up again in the future and, likely hit this thread.

I had a slightly different application to the original poster, hence why I’m curious about your reply. My main listening will be in a large two channel system used as a standalone DAC (it would not be driving the amplifiers directly). I do listen to headphones late at night as well, so that is an ideal aspect of both the Bartok and Lina systems.

I very much like the idea of upgradability, and was thinking rather than getting a Bartok with headphone amplifier, starting simply with a Lina streaming DAC and then later adding the clock and headphone amplifier. Although it certainly ends up costing more in the end for the 3 component Lina system, it has the advantage of being able to be purchase individual components incrementally.

However, my ultimate goal is sound quality for my main 2 channel listening system using an Audio Research REF 6 Preamplifier (needed due to analog sources). So ultimately, if the Bartok would offer significantly better sound quality in that type of system, I would move in that direction and not toward the Lina even with the Lina’s tempting incremental upgradability prospects. (Realizing of course, that the Bartok can be upgraded with a external clock later, but still at more expense then the Lina pathway)

I’m just curious from an engineering standpoint what is different in the Bartok that would make it sound better for a 2 channel system with a separate preamp? Power isolation? Transformer? Etc…

Thanks
I appreciate your thoughts/explanation

Can you explain why the Bartok would sound better as a standalone DAC in a HiFi system then the Lina?

The physical casework on the Bartok allows for better isolation of the various subsections of the DAC, the DAC boards are different and the Bartok has the ability to select different mappers for driving the DAC too.

Hi, I have had a Bartok with the HP amp, then I added the Lina amp to the Bartok and finally I traded the Bartok for the full Lina line up all three pieces. All the above were excellent.

Having said that the Lina full line was the best set up of the group using with my Susvara HP’s. The sound IMO of Lina is the best also. That includes my having the Bartok 2.0 as well. Not sure why the Susvara and my AB 1266 HP’s are best with Lina as the amp itself is not that much more powerful than was my Bartok. I have to believe the overall integration and latest state of the art design approach to HP only solution must make a difference. So in short I am very happy I purchased the Lina 3 piece. Sound quality , form factor, interface screens all IMO were improved.

Not sure why the Susvara and my AB 1266 HP’s are best with Lina as the amp itself is not that much more powerful than was my Bartok.

The Lina amplifier is both balanced and single-ended with a headline figure of 2W into 30Ω balanced which is higher than the 1.4W into 32Ω rating of the Bartok. That is further supported by a dual gain control system with a 10.5dB swing.

The Lina headamp’s 2W 30Ω rating should not be translated as its peak power rating since below 60Ω, voltage gives way to current in terms of bias. In actual fact, the amplifier peaks at just under 4.5W balanced at around 60Ω which is right where the Susvara impedance rating is.

Also, the amplifier achieves its full output voltage swing with any headphone above 45Ω, so with 45-60Ω or typical planar ratings, the power is optimized.

Not sure why the Susvara and my AB 1266 HP’s are best with Lina as the amp itself is not that much more powerful than was my Bartok. 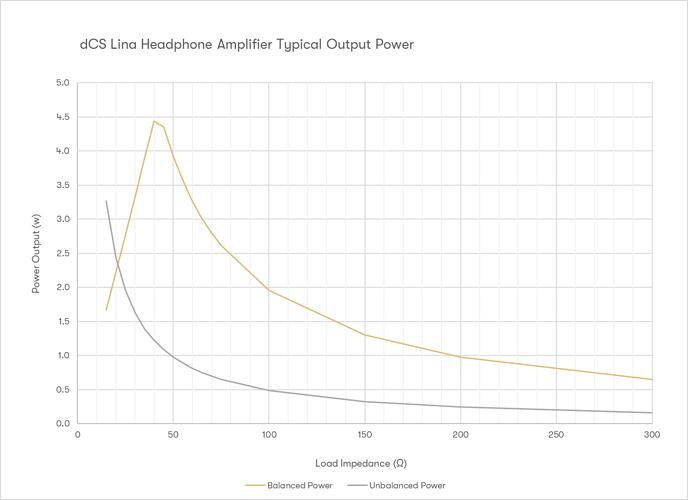 Does this mean that the Lina won’t have the ability to select different mappers down the road?

Well for starters, I’d like to know if it is technically possible, aka if the Lina does have the boards/ technical possibility to do that

.
I’m also curious if the Rossini/Bartok (Non Headphone edition) will get Expanse, but the silence has been deafening on the subject so expect there won’t be an answer on that either

As I’m sure you will understand - even if I were to know the answer to your questions then until such time as any relevant official announcement is made by dCS then I wouldn’t be able to discuss anything that may, could, possibly or won’t happen in the future as such things can change over time.

One can only speculate. Bartok 2.0 came after the Rossini Apex announcement. Could history repeat itself? Time will tell, or perhaps it won’t. Either way the music will continue to sound great out of both Bartok and Lina